Lifting The Nation – a memory piece by Tom Nestor

Nothing ever lifted the spirit of a nation as did The Clancy Brothers and Tommy Makem. Here was a quartet of ordinary folk like you and me taking the world by storm.
When I heard them sing in 1961, I was six years into my first job in Shannon Airport. Brendan O’Regan, that forgotten man of entrepreneurial greatness, had created a duty free shop that would pave the way for an industrial free zone, first of its kind in Ireland, which eventually paved the way for five thousand jobs and a new town in Shannon. The jobs are still there, as is the growing town.
The fifties were terrible years. In the latter half of that decade, fifty thousand emigrants per annum were leaving the country. 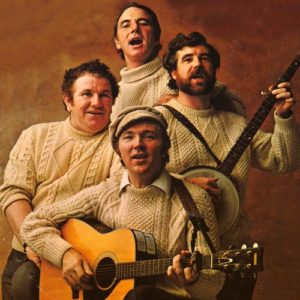 There was an incident from my national school days that will always remind me of that terrible sundering. Sometimes, for a geography lesson, we would gather round the map of the British Isles, showing the six counties in glorious red. Those maps were left behind when the British primary school system was replaced by the Irish version.
A boy, called Josie, standing beside me, was asked if he would point out where Limerick was on the map. He couldn’t find it, neither could he find Waterford, Galway, or Dundalk.
Do you know anyplace at all, came the response from the teacher’s sharp tongue of agitation? Josie’s face lit up, the pointer waved across England, settled over Norfolk, and came to rest in King’s Lynn. His father was there as were all his uncles and where he would follow.
Nearing ten years later I was at a party in honour of a newly ordained Columban Father who was setting off for China. The parish priest was M.C. for the occasion, and he called a young man beside me to sing a song. Abie’s face flushed to a deep red, his shoulders hunched, the notion of standing up and singing before neighbours and strangers terrified him. Lads, lads, he begged, shade me, shade me.
I would never be asked to sing, but if so, I would be looking for shelter too.
Talent alone is never enough. It applies to all artists, to writers and film stars, to entrepreneurs and inventors, every time that something is conceived or created. There are many words for it, but at the end of the day it all comes down to fortune.
All that the magic needs is a slice of luck.