According to a number of sources, Little John came to Ireland with some of the ‘merry men’ following the death of their leader Robin Hood in 1188, writes MARY MOLONEY

In 1938 ‘The Adventures of Robin Hood’ was released by Warner Bros. Pictures with Errol Flynn in the title role and Alan Hale Sr. as Little John. Hale had played the same character in Douglas Fairbanks’ 1922 version of the film and went on to play him again in ‘Rogues of Sherwood Forest’ released by Columbia in 1950.

But who was Little John, and what, pray tell, is the Irish connection? 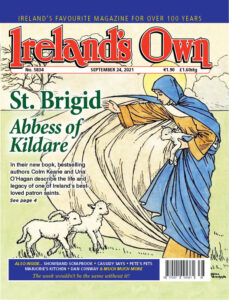 John Little or John Naylor came from Hathersage in Derbyshire, the county next to Nottinghamshire. According to legend, he was over seven feet tall with a thick beard. As the 1938 movie depicts, Little John and Robin Hood met one day when both came to a stream with a long, narrow bridge.

Robin Hood began to cross the bridge. Little John, on the other side, was also crossing the bridge. Neither gave way, and so they fought with thick wooden quarterstaffs until Robin was thrust into the brook and was ‘floating away with the tide’.

Robin climbed out of the stream, blew his hunter’s horn and was promptly surrounded by his Merry men. Robin asked John his name, invited him to join their group and consequently became firm friends.
And so ever after as long as he
lived,
Although he was proper and tall,
Yet nevertheless, the truth to
express,
Still, Little John, they did him call.