Lough Neagh – the Largest Lake in Britain and Ireland

Lough Neagh is big. Very big. Standing on a fringe of shingle looking out across the water, you could be forgiven for thinking that you were looking out to sea. Not surprisingly, the Lough has been called ‘Ulster’s inland sea’. 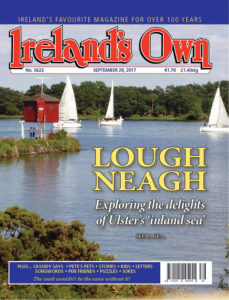 With an area of 383 square kilometres and a shoreline 125 kilometres in length, Lough Neagh is the largest lake in Britain and Ireland. With an average depth of only nine metres and a maximum depth of 34 metres, Lough Neagh is quite shallow. Loch Ness in Scotland, for example, is 230 metres deep. Five counties of the province touch the shoreline – Antrim, Down, Armagh, Tyrone and Derry.

Unlike the sea, of course, the water in the Lough is fresh and forty per cent of Northern Ireland’s fresh water supply comes from it. No fewer than six rivers: River Maine, Six Mile Water, Upper Bann, Blackwater, Ballinderry, and Moyolaflow into it. Only one, the Lower Bann, flows out.

The Upper Bann is the largest of the input rivers. It rises in the Mourne Mountains in County Down and begins a journey of 64 kilometres to join the Lough on its southern edge at Bannfoot in County Armagh. From the north-western corner, the Lower Bann takes the river on to the Atlantic at Portstewart.

There are several accounts of the origins of Lough Neagh. Perhaps the best known is the legend of Finn MacCool who was enraged to find a Scottish giant on his territory. He chased him across Ulster, scooping up a fistful of soil and rocks and hurling it at his rival. He missed and the lump landed in the Irish Sea to become the Isle of Man. The great crater left behind filled up with water and, lo and behold, – Lough Neagh!
Another legend speaks of a woman who removed the capstone from a well to fetch water. She heard her son crying and went to comfort him. She forgot to replace the capstone and the well overflowed, drowning the woman and her son and forming the great lake of Lough Neagh.