Lunch Atop A Skyscraper – the Irish Connection to an Iconic Photograph

It is the photograph that many believe epitomises America’s emigrant story!
On September 20, 1932, high above 41st Street in Manhattan, 11 ironworkers took part in a daring publicity stunt. The men were accustomed to walking along the girders of the RCA building (now called the GE building) they were constructing in Rockefeller Center.
On this particular day, though, they humored a photographer, who was drumming up excitement about the project’s near completion. 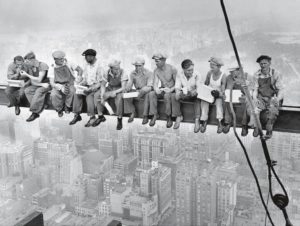 Quite simply, the resulting portrait has become an icon of 20th century photography. To many people it has become a symbol of inspiration and fearlessness – and has since become a popular poster print, often copied.

When it began, the construction of the 14 Rockefeller Center towers was the largest private building project undertaken in the early decades of the twentieth century, and took nine years to complete. ‘Lunch Atop a Skyscraper’ – as the photograph became known – was taken during the final few months of construction.

Many decades later, the Irish film-maker brothers Seán and Eamonn Ó Cualáin, decided to investigate the mystery surrounding the photograph, particularly the identity of the men on the steel beam, after noticing the photograph in a pub in Shanaglish, County Galway.

Locals there were convinced that two of the elusive men photographed on the beam in 1932 hailed from their village.

There was a note beside the photograph written by Pat Glynn from Boston, Massachusetts – the son of a Shanaglish emigrant. On the note he stated that the man on the far right holding the bottle was his father Sonny Glynn, and the man on the far left was Matty O’Shaughnessy his uncle-in-law.

This intriguing link to Galway inspired the Ó Cualáin brothers to produce a documentary, Men at Lunch, which debuted in 2012 at the Toronto International Film Festival, 80 years after the iconic photograph was taken.

The brothers researched the Rockefeller Center photography archives as well as a storage facility in Pennsylvania where the licensing company Corbis holds the original glass plate negative. It is Corbis Images’ biggest selling historical image – more popular than other iconic historical photographs in their catalogue, including those of Albert Einstein and Martin Luther King.

The ‘Lunch Atop a Skyscraper’ image first appeared in the New York Herald Tribune a few weeks after it was taken, in its October 2nd Sunday supplement. Although the photo is commonly credited to photographer Charles C Ebbets, after information emerged in 2003 of other photographers, Corbis issued a statement that said they are no longer certain it was Ebbets who actually took it.

As well as the photographer, the names of some of the construction workers remained a mystery until recent years, and even now confirmation of some of those has proven difficult. Family members of some of them have come forward over the years to reveal who they were.

Despite all the scepticism, the Ó Cualáin brothers were able to confirm through their research that the famous photograph is real, and not a darkroom trick, as had been speculated through the years. And for the first time ever, they positively identified two of the men on the beam.

The documentary Men at Lunch revealed that the third man from the left in the photograph is Joseph Eckner, while the third from the right is Joe Curtis. Other names mentioned over the years include those of Irish heritage such as Michael Breheny, Francis Rafferty and ‘Stretch’ Donahue, but have never been conclusively proven.

It has also been claimed by some sources that Slovak worker Gustáv ‘Gusti’ Popovic appears in the photograph, although this has never been properly verified.
He returned to Slovakia at the beginning of World War II, but was tragically killed by a grenade in his village during that conflict.

As for Sonny Glynn and Matty O’Shaughnessy, they left Shanaglish for America after the Irish Civil War. The Great Depression had just taken effect when the two men landed jobs at the Rockefeller Center.

Indeed, the thought-provoking photograph was taken while the city was in the depths of economic turmoil when one in four New Yorkers were unemployed.

The building where ‘Lunch atop a Skyscraper’ was taken is the centrepiece of the Rockefeller Center complex. The RCA, now renamed the GE Building after the General Electric Company, has 70 floors, including a spectacular observation deck on the roof, and is home to the headquarters of television company NBC.