Maggie Maher left her home near Sliabh na mBan in Tipperary in the mid-19th century to emigrate to America. There she became maid to Emily Dickinson, one of America’s foremost poets. But if it weren’t for Maggie Maher most of the poet’s work would have been lost to the world forever, writes Vincent Murphy.

I didn’t know when I said hello to the couple in the back room of the bar that I was going to be taken on a voyage across time and space, from the famous Irish mountain Sliabh na mBan to the kitchen of Emily Dickinson, the reclusive American poet.

“Are you Jasper?”, the gentleman asked. I said that I was, and he replied that he was told to look for me by the owner of the bed and breakfast where they were staying for a few nights. My family have been in the pub and undertaking trade in Fethard since the mid-19th Century and we hold many of the old ledgers with the funeral records going back over 100 years, so we are often asked if we have records when people are tracing their ancestry.

Robert and Margaret had their homework done before arriving in town and needed little help from me. But they had quite a story to tell.

The following day they were meeting someone in Killusty, the neighbouring village in our parish, with a view to finding one family home, where they were told “You can see the Rock of Cashel on a clear day”, and then going to Killurney, on the other side of the mountain, hoping to find the other family home. 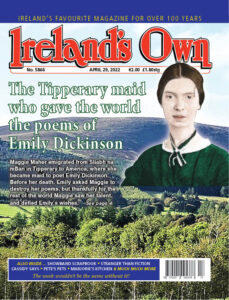 Many of the family had left for America in the mid-19th century, hoping for a better life. Robert’s ancestors Thomas Kelly and Mary Maher had both left Sliabh na mBan and emigrated to America. They grew up on the opposite sides of Sliabh na mBan, but met up and married in America.

Mary’s younger sister, Maggie, also emigrated and had plans to go to California, following the goldminers like thousands of others, but never got there. Instead, she worked as a maid and cook with various families before ending up in the family home of Emily Dickinson.

Maggie Maher’s father was a tenant farmer on Sliabh na mBan. He rented some land from the local landlord, Robert Cooke, who owned Kiltinan Castle (currently owned by the composer Andrew Lloyd Webber) and the surrounding lands, and did quite well from it.

This was the era just after the Great Famine and rural Ireland had had to change. The English system of primo geniture (where the eldest of the family inherited property) became the norm, replacing the old Irish system of subdividing holdings between all of the male siblings until they became too small to sustain a family. It was not uncommon, prior to the Famine, to see families living off of one acre plots.