Eleanor Quinlisk outlines some facts about the Hollywood star who was born on 1 June, 1926, and would have turned 90 this year

Marilyn Monroe was Irish through her mother’s mother, Della Mae Hogan Monroe (1876 – 1927) who could trace her ancestry back to Dublin.

The future film icon had a Hollywood presence from the very start of her life.  At the time of her birth, Marilyn’s mother, Gladys Pearl Monroe Baker, worked as a film cutter at Consolidated Film Industries, a processing lab for the Hollywood studios. 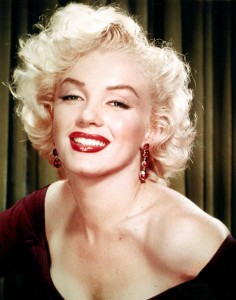 Born on Tuesday, June 1, 1926, at Los Angeles General Hospital, she was named Norma Jeane. Gladys, not oblivious to the glamour and magic of the movies, named her child after Norma Talmadge, a popular screen idol of the silent era.

Norma Jeane would later adopt her mother’s maiden name, ‘Monroe’, as her stage name.  The name ‘Marilyn’ was inspired by actress Marilyn Miller, one of the most popular Broadway musical stars of the 1920s and early 1930s.

This suggestion came from Ben Lyon, a one-time actor turned casting director at 20th Century Fox, who told Norma Jeane she reminded him of Marilyn Miller, whom he had himself acted with.

The star didn’t change her name legally to Marilyn Monroe until 1956, although she’d been known publicly by the moniker since 1946.

Ironically in 1956, she really did become ‘Marilyn Miller’ with her marriage to playwright Arthur Miller.  Though during that union she liked to be called Marilyn Monroe Miller, the initials MMM appeared a lot at that time.

In another, sadder, irony, the Broadway star Marilyn Miller, who enjoyed enormous popularity, had a personal life which was marred by disappointment, tragedy, frequent illness, and ultimately her sudden death due to complications of nasal surgery at age 37.
Marilyn Monroe likewise had a troubled private life, struggling with addiction, depression and anxiety, before her death at age 36. In 1946, her modelling agency told her she would be more successful in Hollywood if she dyed her hair blonde.

In London at the Royal Film Show in October 1956, Marilyn met Queen Elizabeth II. The women, who were just two months apart in age, were 30 at the time.

“MARILYN MONROE MOBBED AT SHANNON” headlined ‘The Cork Examiner, dated Thursday, 22 November, 1956, when the star and her husband stopped off at Shannon Airport. The couple were photographed sampling ‘Irish coffee’ during their short stop over.

Marilyn fell pregnant to Arthur Miller in 1957. Tragically, despite motherhood being her biggest dream, it was an ectopic pregnancy and she lost the baby.

One of her favourite novels was the notoriously complicated ‘Ulysses’ by James Joyce. She said she read it aloud to herself because she loved the sound of it.

The beauty was so paranoid about sweat and spots that she washed her face up to 15 times a day.  When she wasn’t wearing make-up, Marilyn would put olive oil on her face as a protecting agent. She was always reluctant to share details of her beauty regime.
In 1960 the star won a Golden Globe for her performance in ‘Some Like It Hot’. She was never nominated for an Oscar.

The beauty was well-known for her ability to get a laugh.  Actor and musician Jack Lemmon said: “She was a wonderful comedienne and she had a charisma like no one before or since.”

Marilyn married her second husband, baseball star Joe DiMaggio, in January 1954. She asked Joe to promise to leave flowers on her grave every week if she died before him. He later kept his promise. Joe DiMaggio’s last words were: “I’ll finally get to see Marilyn.” ÷