Marking 100 Years of Women and the Vote

As the country prepares to mark the 100th anniversary of the granting of the right to vote in parliamentary elections to women, Eileen Casey looks at some of the people who were instrumental in this important victory in the quest for equality.

In 1992, President Mary Robinson made a formal visit to Tallaght, South Dublin. A fond memory is of me with my infant daughter in my arms being part of the crowd (mostly female) that turned out to cheer her when she exited the State car. It was a big day for Tallaght, a sprawling suburb still in developmental stages, on the outskirts of the city. 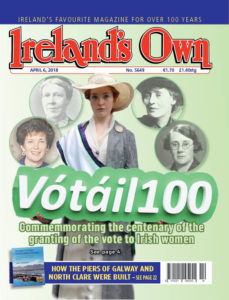 I felt especially proud to add my celebratory voice to the excited chorus that day. Here before us was a living, breathing First Lady of Politics and 7th President of Ireland. Her presence on the political scene (followed by President Mary McAleese), represented a mighty leap forward in gender equality.
Not so many decades before, politics was considered to be a male arena because women were ‘too emotional’. Today, in 2018, 35 women out of 158 TDs are female, still an under-representation but nevertheless, influence outweighs numbers.

A long line of very capable women including Mary O’Rourke, Nora Owen and Mary Harney, have held Ministerial and leadership roles. Once termed ‘the weaker sex,’ women are now very much in the political frame, thanks to a whole host of strong-minded women whose courage, resilience and total dedication helped pave the way.

A female Irish President couldn’t have been envisaged, even in the early part of the 20th century. Although women were – and continue to be – prominent in Irish myth and legend, their role remains relegated to realms beyond the borders of reality.

Margaret Mac Curtain in her excellent book Ariadne’s Thread (Arlen House) makes this point about the past, that women such as Queen Maeve and Saint Brigid are very much to the fore when it comes to finding inspiration for music, drama, sculpture.

Queen Maeve’s saga about her Nurse Elizabeth O’Farrell efforts to acquire the White Bull of Ulster is our greatest cycle of mythological story. Saint Brigid is honoured at the doorway of spring. Grace O’Malley, yet another ‘larger than life’ heroine, is acknowledged as a sea-plundering Amazon.