Martin Luther King Jr. was a social activist and Baptist minister who played a key role in the American civil rights movement from the mid-1950s until his assassination in 1968. King sought equality and human rights for African Americans, the economically disadvantaged and all victims of injustice through peaceful protest, writes Gerry Breen

On 4th April, 1968, while he was standing on the balcony of his motel room in Memphis, Tennessee, where he was scheduled to lead a protest march in support of black sanitary workers, Martin Luther King was shot. Following emergency surgery, he died at St. Joseph’s Hospital. He was aged 39 years. 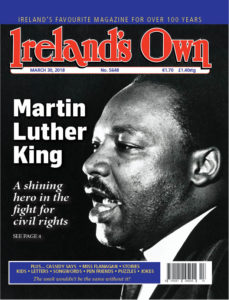 Now fifty years after his assassination, it is worth reminding ourselves of the heroic role this young American Baptist minister played as a leader of the civil rights movement in America from 1954 until the time of his death.

Using the tactics of non-violence and civil disobedience, inspired by the great Indian leader Mahatma Gandhi, he became the most visible spokesman for, and the most formidable leader in, the struggle for the advancement of civil rights.

Martin Luther King, Jnr., was born Michael Luther King, Jnr., on 15th January,1929, in Atlanta, Georgia, but later had his name changed to Martin. Both his parents were African-Americans, but he also had Irish ancestry through his paternal great-grandfather.

There was also another Irish connection. Martin Luther King inspired the Irish politician and activist John Hume, the former leader of the Social Democratic and Labour Party. Hume regarded King’s legacy as quintessential to the Northern Irish civil rights movement and the signing of the Good Friday Agreement, and described King as ‘one of my great heroes of the century.’

King was a gifted student and he was able to skip a number of grades before enrolling in college. He attended graduate school at Boston University where he received his Ph.D. degree in 1955. While he was in Boston, he met and married Coretta Scott, a young woman of outstanding intellectual and artistic attainments. They had two sons and two daughters.

Martin Luther King suffered from depression for much of his life. In his early years, he felt huge resentment against white people because of the persistent racial humiliation he and his family and neighbours had to endure in the segregated South.

In December 1955, Rosa Parks was arrested for refusing to give up her seat on a city bus in Montgomery, Alabama, and this led to the Montgomery bus boycott in which King was a prime mover. At the time, he was the pastor of the Dexter Avenue Baptist Church in Montgomery. The boycott lasted 382 days, and then on 21st December, 1956, the Supreme Court of the United States declared that the laws requiring segregation on buses were unconstitutional. From then on, negroes and whites rode the buses as equals.

King paid a heavy price for his involvement. During the boycott, he was arrested, his home was bombed and he was subjected to much personal abuse. However, he never wavered and he emerged as a civil rights leader of the first rank.