When I met Mary Duff recently in a south County Dublin hotel, the first thing I noticed was that she was sporting an All-Ireland medal on a gold chain. It is one of her most precious possessions, and has travelled the world with her. It could be described as her lucky charm because Mary’s career has a lot in common with this medal.

The medal was won by her father, Tom, who played for Meath in the Leinster semi-final against Offaly. He was unfortunate to break his leg on the field and was thus deprived from playing in the final, which Meath won. The year was 1954. 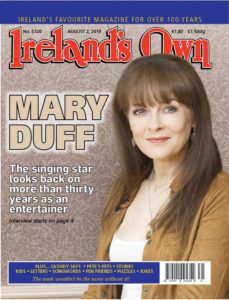 Although 85 years old, he is still playing the accordion, doing gigs, and learning new tunes. It was her dad who gave Mary her first break in the music business.

“He came home one day and I was recording myself singing ‘Patsy Fagan’ on an old reel to reel tape recorder. I think he was surprised that I could sing in tune! Although I was only 12 years old, he allowed me sing at the weekend at some of the gigs when he was performing locally, and that’s how it all began. I was attending Heronstown national school at the time, and singing in the school choir. I knew in my heart and soul that all I wanted to do was sing.”