Mary McAleese and the 17 Irish Martyrs

David Looby talks to the former Irish President, who made history herself by being the first woman in the world to succeed another woman as president, about her book on Irish martyrs which she wrote following a TV series she was commissioned to do in the early 1990s.

Mary McAleese is no shrinking violet and in her new book, The 17 Irish Martyrs, she gets to grips with a topic which is still as relevant today as it was in the era when faithful Irish people were murdered for their beliefs.
The former President of Ireland’s easy-to-read, informative book – which runs to 157 pages – has its roots in a TV series she was commissioned to do in the early 1990s.

It was on September 27th of 1992 when His Holiness John Paul II beatified 16 Irish men and one Irish woman. The 17 are the subjects of the book, which draws upon the bloody, cruel regimes of English kings and queens bent on bringing a troublesome Irish Catholic flock under its control.

As people heard Mass in secret hideaways and travelled for miles to meet with fugitive priests, they were also fighting a government who wanted to force the Protestant state religion on them.
From this time of suffering and sacrifice, nearly 460 Irish people were put forth as dying for their faith. McAleese posits the question: how do we define what a martyr is? 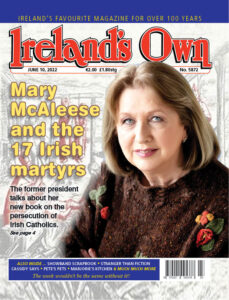 Martyrdom is defined as the highest proof of love in the Church lexicon. Martyrs then are the blameless victims of sectarian hatred, often killed due to intergenerational wounds.
The book could have been one of relentless gore, but it is suffused with hope and optimism.

McAleese doesn’t shy away from criticism of the church, including its misogyny.
She speaks of how God was recreated in man’s image and likeness, and in 17th century England, this reflected a cruel king – ‘a bully, small, petty and vindictive’.
She affectionately refers to ‘the people who shaped my ancestors’.

“If the Church survives today then it does so, at least partly, because of the sacrifices made by its faithful, who over centuries of doubt and repression, drew comfort and strength and bolstered our flagging faith by remembering the courage of our martyrs.”

Peppering the book with smatterings of historical research, including how Pope Adrian IV gave Henry II the rights to Ireland, she writes: “How ironic that the successor of Henry II, who had been given Ireland as a papal gift, should now be the author of a plan to wipe out every trace of Roman Catholicism from the map of Ireland.”

This religious genocide is vividly brought to life in the book, which shows how ‘for over 100 years the price of being a Catholic in Ireland was the threat, and often the violent reality of death’.
Only one Irish martyr has ever been canonised – Saint Oliver Plunkett in 1681 – a source of disappointment for McAleese.

Catholics in the 17th and 18th centuries were offered freedom, money and status if they transferred their spiritual loyalty to the Monarch, but most refused.

“The martyrs resisted their debasement not with violence but with their faith’.
McAleese celebrates their faith and ability to forgive, even at the point of death, their oppressors.
“Perhaps they still have something important to say in a world where faith, at times, is a fickle thing’.

Shot through with historical nuance and great insight, the book includes seventeen fascinating stories, beginning with the killing of Bishop of Mayo, Patrick O’Healy, who was the first of the seventeen to die.
McAleese said the toxic mix of politics and religion made life in Ireland extraordinarily difficult for the vast majority who were Catholic.

“They were having Protestantism rammed down their throats. They were powerless to do anything about the use of violence and cruelty to repress their own freedom of religion and to insist they conform to the politics of not only Protestantism, but also colonialism.”