Mary Kelly was born in Rathangan, County Kildare, on the 15th of May, 1907. She was the third of nine surviving children of Michael Kelly and his wife, Mary Anne Kelly (formerly Treacy).

Her father was a farmer on a two-hundred-acre holding, but his gambling ruined the family financially. He then set up a drapery business, but this enterprise also failed. Eventually, he died, and his widow turned to dressmaking to support herself and her children. 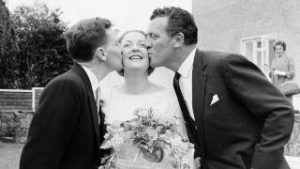 As for Mary, who normally styled herself ‘Maura’, she was educated at the Brigidine Convent in Tullow, County Carlow, with the intention of becoming a teacher. But the death of her grandmother (who also ran a dressmaking business) put paid to that plan. So, at the age of nineteen, she travelled to Spain to work as a governess.
Unfortunately, she was treated badly, and, was involved in a number of unhappy romances and one engagement, which she broke off.

But, on the other hand, she learned typing and shorthand, and, after quitting as a governess, secured employment in various offices, including a bank and a newspaper.
At the same time, she provided umpteen newspapers and magazines back home in Ireland with a steady stream of stories, articles and poems.

Then, in 1928, at the age of twenty-one, she returned to Ireland and was taken on as a journalist and broadcaster with the newly-established 2RN (which, in 1937, became Radio Eireann). And, in the same year, she married a journalist, James Laverty.
Unfortunately, her husband lost money through a business venture with the Irish Sweepstake.

As a result, she had to turn to writing to provide for herself and the three children who were born to her marriage. And, for good measure (or bad measure), the marriage ended in a separation.

Maura Laverty (as she was now known) continued to work for 2RN (otherwise Radio Eireann). Here, she was in charge of women’s and children’s programmes broadcasting on female issues of the time – cooking, domestic economy, household tips, and for a while, she played the role of radio ‘Agony Aunt’.

Then, in 1941, the Government commissioned her to publish Flour Economy to teach housewives how to cope with the wartime scarcities.

The following year, 1942, she published her first novel, Never No More, which was based on her own childhood in Rathangan, County Kildare. It was enormously successful, and attracted praise from all quarters, including a letter from Brendan Behan, who was in prison at the time. But, on the other hand, a fanciful story has it that copies of the book were burned in her native Rathangan.

More novels flowed from her pen in the 1940s, some of which were banned. Common opinion had it that they were banned, not on moral grounds, but because the authorities could not cope with her realistic descriptions of the appalling living conditions of poor families at that time.

Then, towards the end of the 1940s, in 1948, she scripted an election campaign film for the then recently formed political party, Clann na Poblachta. This consisted of a commentary on footage of long dole queues and dirty tenements.

Later, in the 1950s, she hosted the ESB’s sponsored lunchtime programme on Radio Eireann. However, this broadcasting did not interfere with his writing, and, among other works which she wrote in the 1950s was Tolka Row, in 1951.

And it is for this that Maura Laverty is best remembered, not because it was a play in 1951, but it was Teilifís Eireann’s first ‘soap opera’. Starting in 1964, Teilifis Eireann broadcast a half-hour programme once a week, entitled Tolka Row, based on the 1951 play.

It centred on the Nolan family – Jack and his wife, Rita, their two grown-up children, Seán and Peggy, and their neighbours and workmates in a new Dublin Corporation housing estate in the north of the City.

Unlike modern TV soaps such as Fair City or Coronation Street which have teams of umpteen scriptwriters, Maura Laverty wrote the script of Tolka Row single-handedly!
This involved a hectic work schedule, for which she was paid the then astronomical fee of thirty guineas (£31 10s od) per week, which helped her to buy a house.
Because she had to meet a tight weekly deadline, she regularly asked not to be disturbed.

And, it was for this reason that her body lay undiscovered in her home for some days after her death, probably on the 26th of July, 1966, fifty years ago this month.