‘May His Spirit Still Live On’

In June 1963, John F. Kennedy became the first serving President of the USA to visit Ireland. He came to visit the land of his ancestors while on a European tour, flying to Dublin from Berlin. Fionnuala McNicholl was just 3 years old at the time, but the events of that June – and subsequently those of November 1963 – left a lasting impression.

June 26th marks 55 years since the visit of President John Fitzgerald Kennedy to Ireland. Anticipation and enthusiasm for the four-day visit swept the entire country.

President Kennedy was held in the highest esteem among most Irish households at the time, and our house was no exception. Amid family photographs, pictures of The Holy Family and Pope John XXlll, sat a framed black-and-white head and shoulder picture of a smiling John. F. Kennedy. A pretty picture chocolate box, devoid of sweet contents, housed newspaper cuttings of his political journey to the White House. 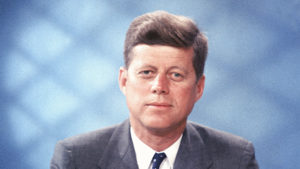 I was a child in June 1963 when J.F.K. made his historic visit. News of the American dignitary’s visit went well and truly over my young head. What didn’t go over my head however, was the fateful day five months later, on November 22nd, 1963, when John F. Kennedy was assassinated.

It was the first time I saw my mother cry.

Rose, our neighbour, called into our house, where both women sobbed as they talked of, “the terrible news.” Not to be outdone, I wept too. What else would a three-year-old do?

Later, there was a great hush as my parents and older sibling’s gathered around the wireless with red, welled-up eyes, listening to news bulletins. We didn’t have television then, so we all went next door to watch the evening news. 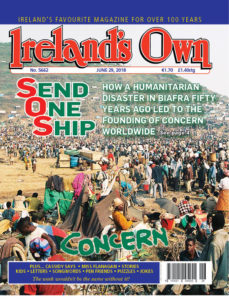 Again tears streamed, watching Telefís Éireann broadcast reports of the assassination via Telstar satellite, as pictures from Dallas filtered across the small, snowy, hissing screen. Two days later, we returned next door to watch the funeral.

Throughout Ireland and across the world, poets and singer-songwriters such as Bob Dylan, put pen to paper in tribute to President Kennedy. My early memory of such tributes came shortly after we got our new record player, in the summer of 1966.