Meet the Countdown Presenter who was Educated in Ireland

As the presenter of Countdown on Channel 4 – Nick Hewer beams into our living room almost every weekday afternoon. Before that he spent ten years as Sir Alan Sugar’s right-hand man on The Apprentice on BBC. He’s been a fixture on our television screens for over a decade – and comes across as a typical well-refined Englishman. But that image is somewhat misleading – for Hewer carries an Irish passport, supports the Irish rugby team and even went to school in Co. Kildare. 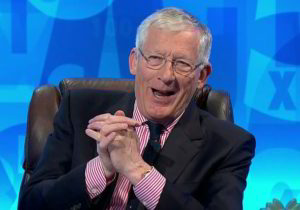 Hewer made his way into the public consciousness as a business guru in The Apprentice. His direct manner, dry wit and sometimes brutal honesty made him a hit with viewers and he thinks a lot of his business acumen came from the time he spent in Ireland.

“The Irish have an in-built entrepreneurial spirit, that is, per head of population, probably greater than that the English one,” he explains. “It came about because they had to do it. If they didn’t do it for themselves – nobody was going to help them to do it. So you get great Irish entrepreneurs – who all too frequently had to leave the country to do it. But that’s changing now.”

Hewer went to secondary school in Clongowes Wood College, just outside Clane, in Co. Kildare, where he was taught by the Jesuits – and would have extended his stay in Ireland for even longer if his family could have afforded to send him to Trinity College to study law.

Hewer’s Irish roots are deeper than even he thought. While participating in the BBC show Who Do You Think You Are? he explored his family history and established the fact that Oswald Jamison -his grandfather (on his mother’s side) – was the High Sheriff of Belfast during the 1920s – a highly unusual, and prestigious, position for a Catholic to hold in those days.

Indeed, Ireland plays an even more central role in Hewer’s life – because his parents met in Dublin – where his father was studying at Trinity and his mother across the city in UCD but he was not destined to follow in their footsteps and study at university.

“I thought I really wanted to be a lawyer,” says Hewer.  “It’s a bit sad actually. If I have got one regret in life it is that I didn’t go to Trinity. Family circumstances dictated that I couldn’t go. My brother was already there studying medicine.

“Family circumstances suggested that I’d be better off articled to a lawyer at home – which is what you could do in those days. You can’t do it now as you have to have a degree. My father had put five kids through private education and didn’t really fancy the thought of having to pay my way through university on top of that.

“That was the plan except I didn’t follow it – I went down to London and made my own way.”

In London, Hewer started his own public relations company – looking after the business reputations of the likes of the Aga Khan and eventually Alan Sugar – who ran a computer company called Amstrad. Hewer’s company was highly successful in its own right but he had officially retired when he began the second act of his life – becoming a television star at the age of 60. “I had retired in February 2004,” he says. “I had sold my business in 1998 but kept on working with clients like The Aga Khan and Alan Sugar as a sort of consultant. I travelled the world and it was great. I retired properly in February 2004 and Alan Sugar held a big party for me.