Memories of Growing Up With Ireland

For her book Growing Up With Ireland journalist and author Valerie Cox collected the memories of twenty-six men and women who were born in the 1920s and grew up through a time of profound change in Ireland.

When I was a small child in 1950s Dublin, my mother often spoke about the relatives we had never met. There was Uncle Eddie who died just before I was born and who had given money to a great aunt to buy ‘the baby’ a present. But the great aunt, in her infinite religious wisdom, had spent the money on Masses for his soul instead. 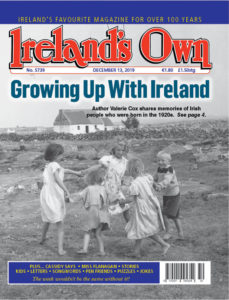 Then there was my maternal great-grandmother, ‘Ma’, with her long white hair, whom I vaguely remembered, a seamstress in Harold’s Cross who used to make clothes for Maud Gonne McBride. My grandmother, Nellie Tucker, told us how she remembered Maud coming to their home for dress fittings, accompanied by her wolfhound, Dagda.

Nellie was full of stories and also remembered playing in her grandfather’s workshop while the Fenian Brotherhood held their meetings there. Her grandfather was Michael Lambert, the man who made the key that let James Stephens out of prison.
We all have our family memories that can transport us back over a hundred years, to a simpler life, a world dominated by family and community, a world where most people were poor but unaware of it and an era where conflict and war and death were never far away.

In my book Growing Up with Ireland, I have collected the memories of twenty-six men and women who were born in the 1920s, who grew up with the foundation of the Free State in 1922, who saw the War of Independence, the arrival of the Black and Tans, a World War, emigration and partition.
But their daily lives revolved around the farm or the city, going to school, falling in love and starting a family.

A ROMANTIC TIME
There are the stories of romance. Tom O’Mahony from Ballylanders in Co Limerick met his wife, Alice, at the crossroads on the way home from a dance. It started to rain and they sheltered under a tree before he walked her home.
Anne Kennedy was eighteen when she met her husband, Frank, as she cycled home from work. Frank was a bus driver and he started throwing roses at her.

‘Frank would throw a rose at me from the cab window and I would get off the bike and pick it up. That’s how it all started!’
Anne’s mother died when she was only twelve but she remembers as a small girl, being put on the crossbar of her Dad’s bike to go from Dundrum to Merrion Strand to collect cockles as a treat for her mother.

Sabina Tierney (born 1926) says she met the love of her life, Thomas Paul Tierney, at the local ballroom of romance and they married six years later. Sabina remembers that she wore a blue coat and hat and her new mother-in-law organised the wedding breakfast in her house. But there was no honeymoon; her new husband was a busy farmer and looking after the farm was their priority. ‘It was just back to work as usual the next day. A lot of people did that then, or they might just go away for a day or two.’

When I went to meet John Flanagan (1925-2019) in Dundalk he immediately pointed to a photo of his wife, Betty, telling me she was a former ‘Miss Louth’. They met at a dance in the town hall and ‘she was a good-looker, she had won the title of Miss Louth. We were going out two or three years when I proposed to her!’