My father, God rest him, made his living (such as it was) from the land. Like all farmers then and now, he always kept an eye on the weather and the markets he was selling into, his contributions to same amounting to no more than a few cattle and a score or so of lambs each year. 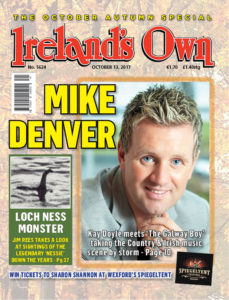 Ned (as most people called him) wasn’t much of a man for the television, as the saying goes. His interest extended little further than the Riordans, news, weather and a show that had a man called Michael Dillon at the helm. Mart and Market was something of a godsend to Father for it gave him a fair good idea of how much he was likely to get for his livestock. When commentating on market trends Dillon had his own unique ‘spake’ when it came to imparting information.

If, for instance, he described the trade for hoggets as being ‘sluggish’ what he was really saying was that the market for same was bad. If he used the word ‘slow’ instead of sluggish, well then it was downright bad!! If, on the other hand, he stated that the market for weanling bullocks was ‘firm’ then one could take it that they were making good prices. If there were two words that every farmer wanted to hear then those terms were ‘very firm’.

While the information that Michael imparted to his viewers had been gathered from marts all around the country, the filming of proceedings was generally confined to two such venues – Maynooth and Blessington.

Thanks to Michael Dillon’s five-minute market round-ups, farmers back in the 1970s became well acquainted with the nameplace, Blessington. In time they (and a good many others also) would become even more familiar with another settlement in Wicklow.