The telly! The soap opera, one that’s home produced; the type that chronicles the lives of people like ourselves and our sometimes not so ordinary neighbours of course! When it comes to capturing the general public’s attention long-term it’s hard to beat your good ‘soap’.

Like the West End-theatre production of Agatha Christie’s play the Mousetrap (now in its 64th year) the world’s most famous TV soap opera, Coronation Street, goes on and on. ITV’s Corrie made its TV debut in 1960, at a time when we here in the R.O.I. didn’t even have a television station. Within two years, however, things had changed for by then we had our very own Telefís Éireann and within two years of the station’s birth we had a home produced soap to rival Corrie, Dublin’s answer to Manchester if you like!
Tolka Row made its small screen debut at 7.20p.m. on Friday, January 3rd 1964, at a time when TV sets were rather scarce in rural Ireland. 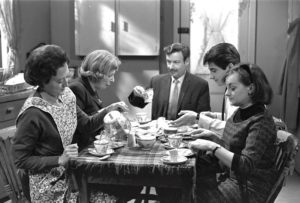 For those country folk who did enjoy the luxury of having a telly the new show was a massive “eyeopener” – an insight into a way of life that was virtually alien to those who resided in the countryside, if not in the towns.

Like Corrie, the new series was one of a domestic nature in an urban setting, one which kept track of the fictitious Nolan family who lived in an invented housing estate in Dublin in the not too fictional Northside.

The Nolans were Northside ‘blow-ins’, having ‘blown in’ from the other side of the Liffey; from a tenement building in the inner city’s Liberties to be precise. Now while every Dubliner at the time knew where the Liberties was, no-one knew where this new ‘corpo’ estate called Tolka Row was apart from the fact that it was somewhere in the outskirts of the city, which at that time could easily have been Glasnevin or Drumcondra; the River Tolka flowing through both.

A new home meant new neighbours for the Nolans, ones such as the Feeneys, Gabby Doyle, Chas and Queenie Butler for instance.

The Butlers! A pair of dog-lazy individuals who had a weakness for gambling and thieving. The Nolans! Well, they were a respectable, hard-working responsible family.
The Nolans and Butlers, polar opposites, not destined to get on well with each other. Rancour between neighbours – as good a base as any for a story line.

Neighbourhood frictions – just one of the many sub-plots that captivated the soap’s followers throughout itsfour and a half year run.

Tolka Row was nationally popular but nowhere more so than in Dublin’s working class communities where the soap was all but revered by the people who lived there.
In Jack and Rita Nolan, for instance, many of those residents saw mirror images of themselves, their lifestyles and ongoing problems: awkward neighbours, difficulty in finding half-decent long-term employment and the scourge of unemployment of course. No money when out of work and for many of those who were working no half decent surplus of same either.

Jack Nolan, stable and hard-working, was no different to many of those other male breadwinners who tuned in once a week to follow Jack’s fortunes on the telly. Jack, industrious and…proud, the family provider who saw that particular role as being his and not his wife’s.

Jack with no money at one stage, to spare for some much needed home improvements and Rita, talking about going out to work in order to supplement the family’s income – heresy in the making! What will the neighbours say! What the neighbours were going to say didn’t dissuade Rita for she went on to find a part-time job for herself and naturally enough put a rather large dent in Jack’s pride as a result. By getting a job in order to earn some badly needed cash, Rita Nolan made it more socially acceptable for hard-pressed real-life housewives to work outside of the home.

Tolka Row did it’s best to portray life as it really was in Dublin’s 1960’s working-class communities. The programme touched on all aspects of life that residents of large public housing estates were familiar with in one form or another, including emigration. While Tolka Row will always be remembered as Telefís Éireann’s first home produced soap opera, the show (in a technical sense) saw the light of day long before our national broadcaster came into being. Staged in the Gate Theatre, Dublin – Maura Laverty’s creation was originally a play.

The Nolans, parents to a playboy son called Sean. Well, he returned to once again live north of the Liffey, to a place called Carrickstown. He calls himself Bella Doyle nowadays. Nolan? Doyle? You know what! I think his real name is neither, I believe it to be JIM BARTLEY!