MGM became Hollywood’s biggest studio because it realised that the glamour and sophistication of its stars was every bit as important to audiences as the films they made, writes Tom McParland.

America was a country formed by stardom long before Hollywood. One year after the Declaration of Independence in 1777, it replaced the Union Jack ensign with one ‘forming ‘thirteen stars, white in a blue field, representing a new constellation.’ Nothing better expresses America’s first breath of freedom. And fittingly, America was to rate everything from generals, hotels and movie actors in future stars.

From the 1920s onward Hollywood studios were rated by the lavishness of their movies and the stars they either created or had under contract. The big five were MGM, Paramount, Warner Bros, 20th Century Fox and RKO, their logos as fascinating as the pictures they impelled stars to make.

None was bigger than the self-proclaimed ‘king’ of studios, Metro Golden Mayer and its symbolic MGM lion. Named Calibre (then Slats) but nicknamed Leo, it was born at Dublin Zoo and at first – like Goldwyn Pictures – it was silent. But on July 31st 1928, more than four years after the Metro, Goldwyn and Mayer Pictures had merged, Leo could be heard growling below the MGM adopted motto, Ars Gratia Artis (arts for art’s sake) was used on all B&W MGM releases fro m 1924 onwards.

MGM from its beginning realised that glamour and sophistication were as important to audiences as screenplays (which before sound, only related to action). Because Hollywood itself was founded to initially dodge Edison patent fees, the movie business – formerly a fairground peep show – was always a mutton-dressed-as-mutton affair. And as anyone who’s seen Hollywood will testify, it remains a two-bit town. But MGM’s set dressers made two-bit Hollywood look like $2million. 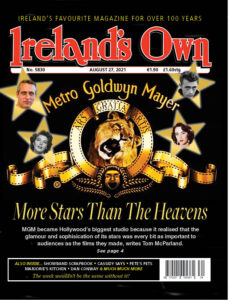 In September 1928 MGM had already set Joan Crawford on the road to eventual talkie stardom in the silent Our Dancing Daughters. Eventually she danced through four husbands including Douglas Fairbanks Jnr. and Franchot Tone. To keep pace with USA cinemas’ slow transition to sound, MGM made 115 movies before making it’s last silent, The Kiss with Greta Garbo.

In 1925 MGM had already released an elaborate silent and previous part-Technicolored Ben Hur (the Ramon Nevarro remake of an earlier 1907 silent directed by Irish-American Sidney Olcott). Later it would re-make two lengthy Ben Hur epics with chariot-chasing Charlton Heston in 1959 and Jack Huston in 2016 (MGM as distributor).
But in just five years – 1929 – it released its first Oscar-winning, full-talkie feature, The Broadway Melody. And by 1931 it had released Cecil B DeMille’s The Squaw Man, Hollywood’s first all-talkie western.

Since three silent Tarzan movies were made between 1918 and 1921 perhaps it was felt that a studio with a lion logo should let the world hear Leo’s roar and Tarzan’s yodel in six jungle pictures. So, on October 10 1932, it released Tarzan The Ape Man with Johnny Weissmuler as a grunting simian-like, two-word intellectual and Maureen O’Sullivan as delectable Jane – a disguised Adam & Eve minus sunburn with skimpy costumes substituting nudity.