Michael Dennis Corrigan from Fermoy, County Cork was one of the most successful conmen operating in London during the 1930s and 1940s. His highly imaginative swindles are legendary. Posing as a general of the Mexican army, he once successfully sold non-existent oil concessions to the British government. On another occasion, he played the part of a chief inspector in the Royal Canadian Mounted Police seconded to Scotland Yard and persuaded a West End jeweller to lend him his stock for a day in order to trap a gang of Canadian thieves. 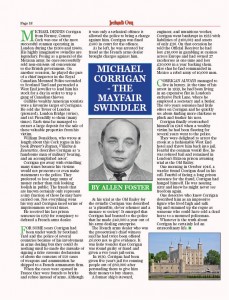 Gullible wealthy American tourists were a favourite target of Corrigans. He sold the Tower of London (pictured), London Bridge (twice), and 145 Piccadilly to them (many times). Each time he managed to extract a large deposit for the sale of these valuable properties from his victim.

William Donaldson, who wrote at length about this Cork rogue in his book Brewer’s Rogues, Villains & Eccentrics, describes Corrigan as ‘a handsome man of military bearing, and an accomplished actor’.

Corrigan got away with swindling many times because his victims would not prosecute or even make statements to the police. They preferred to lose large sums of money rather than risk looking foolish in public. The frauds that are known certainly only represent a tiny fraction of those he may have carried out. Not everything went his way and Corrigan faced terms of imprisonment several times.

He received his last prison sentence in 1939 for conspiracy to defraud a French arms dealer.

For some years Corrigan had been under watch by Scotland Yard and the police of several countries because of his involvement in arms dealing but they could do nothing until he made the mistake of signing a false customs declaration of about the contents of 550 cases of weapons and ammunition he shipped to a French armaments firm.

When the cases were opened in France they were founds to bricks and refuse instead of arms. Although it was only a technical offence it allowed the police to bring a charge against him. Corrigan was fined £500 in court for the offence.
As he left, he was arrested for fraud as the French arms dealer brought charges against him.

At his trial at the Old Bailey for the swindle Corrigan was described as ‘a plausible, clever schemer and a menace to society’. It emerged that Corrigan had boasted to the police that he made £40,000 a year out of his arms dealing enterprise.

The French arms dealer who was the prosecution’s chief witness said he had twice been offered £6,000 not to give evidence. It was little wonder that Corrigan was found guilty of fraud and given a two years jail-term.
In 1930, Corrigan had been given five year’s jail for conning people out of £80,000 after persuading them to give him their money to buy shares.

A former ship’s steward, engineer, and munitions worker, Corrigan went bankrupt in 1933 with liabilities of £108,882 and assets of only £30. On that occasion he told the Official Receiver he had lost £10,000 in gambling at casinos across Europe and had owned 27 racehorses at one time and lost £30,000 in a year backing them. Also that he had commanded in Mexico a rebel army of 10,000 men.

Corrigan always managed to live in luxury. At the time of his arrest in 1939, he had been living in an expensive flat in London’s exclusive Park Lane, where he employed a secretary and a butler. The two years sentence had little effect on Corrigan and he quickly set about finding more chickens to pluck and feather his nest.
Corrigan finally overreached himself in 1946 when a wealthy victim he had been fleecing for several years went to the police.

They were delighted to arrest the crook at a fashionable West End hotel and throw him back into jail. Fearful the conman would flee, he was refused bail and remained in London’s Brixton prison awaiting trial at the Old Bailey.

One morning in October 1946, a warder found Corrigan dead in his cell. Fearful of facing a long prison sentence for the fraud, Corrigan had hanged himself. He was nearing sixty and knew he might never see freedom again.
One detective who knew Corrigan described him as an impressive figure who lived high and talk big and summed up the rogue as someone who could have sold a dead horse to a mounted policeman.
Whatever is the truth about Corrigan he certainly led an extraordinary life.