Seán Creedon chats to best-selling author, Michael Harding, about his new book in which he writes letters to people who are dead, some he never met and an old flame …

It’s often said that letter-writing is a dying art, but Michael Harding is certainly giving the ancient art of putting simple thoughts down on paper a new lease of life.

Michael’s new book All The Things Left Unsaid, Confessions of love and Regret, opens up a new angle on the art of letter writing and Hachette has now published some of the letters that he wrote to various people last year. Some of the recipients are dead, some he has never met, and also included is a letter to a former lover. 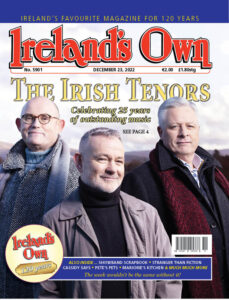 For almost fifty years Michael has been crafting words in a bid to express himself and explore truths about the human condition. But even still he found himself unable to say certain things he really wanted to.

Then in April last year while recovering from surgery, Michael rented a cottage in the Gaeltacht area of West Donegal where he hoped to improve his Gaeilge and try and get fit again.

The solitude in West Donegal allowed him to think again about life and the people who had profoundly affected him; mentors, lovers and old friends. There on the Atlantic coast he wrote letters, with an intimacy not previously risked.
Michael was familiar with Donegal as he has been going there with his family since he was 11 years old. Although the family lived 70 miles away in Cavan Town there were often day trips to “beautiful Bundoran”.

Some of the letters never even made it into envelopes; they were thrown in the waste paper bin. Others were put into envelopes and affixed with a stamp, but then left in the drawer of a 200 year-old table which Michael likes to write on.