Miss Flanagan inhaled deeply as she stepped out of the taxi.  Sea air!  Two weeks of it would do her good. She had been looking forward to this late spring break for ages and now here she was, on the doorstep of an excellent guesthouse, after an enjoyable train and taxi ride.

Ida Goff, the guesthouse owner, was very efficient, making lots of conversation as she showed Miss Flanagan around. A bit stressed, though, Miss Flanagan sensed, by her flushed face and occasional harried expression. 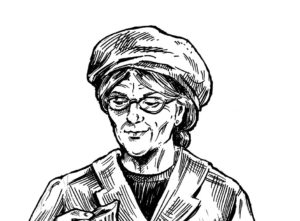 “You’re a retired teacher, is that right?”
“Partly,” Miss Flanagan said, handing the guesthouse owner a business card as she was shown her bedroom on the first floor.
“Amateur detective! Gracious me!”
“It keeps the brain cells working,” Miss Flanagan said. “And I like to help out where I can.”
“I see,” said Ida Goff, as she hurried downstairs to answer the phone.  “That’s very interesting…”

Ah, holidays. Miss Flanagan opened the windows wide and inhaled deeply again as she took in the sea view.  Fourteen days of beach walks and catching up on her reading stretched before her – glorious! She liked these times at seaside places, when the first stir of visitors, usually elderly people who could get good bargains in pre-peak times, had begun to arrive but the herd had not yet descended.

So far, so good. Her first day’s holiday had been most enjoyable. She had walked out to the point, enjoying the sound of seagulls and the sight of boats, not to mention the smell of seaweed and the taste of salt on the wind.

Later she drank a welcome cup of tea at the café near the arcade that stood beside the amusement park where, for the moment, waltzers and chair-o-planes only spun and swung at weekends.

Day-trippers during the week would have to suffice with buying candy floss from the café or the clatter of one-armed bandits in the arcade if such activities appealed to them, she decided.

Miss Flanagan, however, was content with her book and the view and letting the world go by.

Her peace didn’t last very long, however. After dinner, Ida Goff came into the conservatory and asked if she could speak to her. Valuables had gone missing from her house, she said, in the past three weeks – china, crystal and some jewellery including an antique emerald ring that was worth several hundred euro.