‘The Nation holds its breath’…

Genoa, Italy, the Italia 90 World Cup Quarter-Final. George Hamilton uttered the immortal lines, as Arsenal’s Dave O’Leary steeped forward. O’Leary was but one kick away, from re-writing Irish soccer history. The centre-half placed the ball carefully on its spot, and calmly sent Romanian keeper, Silviu Lung, the wrong way. The nation exhaled.
Imagine a football past, where Ireland had never qualified for a major championship. Where Ray Houghton’s header against the English in Stuttgart was but a dream, and Ireland never actually qualified for a major international tournament. It almost happened!
The appointment of Jack Charlton ushered in the good times for Irish football. Yet, but for a quirk of fate, Charlton would never have been elected as Irish manager. 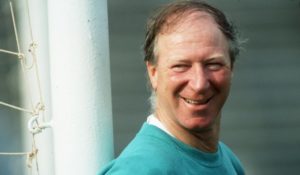 The story behind the appointment of the former World Cup winner had more twists and turns than the plot of an Agatha Christie novel.

In 1986, the Eoin Hand-era was drawing to a close, Irish football was at rock bottom. Dwindling crowds, mounting debt, and a struggling national side ensured that quality candidates weren’t exactly queuing up for the Irish manager’s job.
When ex-Liverpool manager, Bob Paisley, ruled himself out of the running, a short-list of three candidates was drawn up, but in the end there were but two men standing. The meeting at 80 Merrion Square had a simple choice of Charlton, or former Irish boss, Liam Tuohy, for the Irish post. Charlton was by all accounts bottom of everyone’s list.

The fiery Geordie’s management style was not everyone’s cup of tea. Charlton certainly did things his own way. He had declined an interview for his first managerial post at Middlesbrough FC. He instead issued a list of things he required when he received the job! Charlton also never signed a contract, preferring a gentleman’s agreement. He then asked for a salary of ten thousand pounds, and when the chairman offered to pay him some more, refused point blank!
Charlton duly delivered promotion for ‘Boro’ in his first season in charge. He went on to manage Sheffield Wednesday, and Newcastle, with mixed results. The biggest negative about Charlton’s possible appointment was the fact that Ireland had never had a coach from another country. Before the voting could take place, FAI President, Des Casey, pulled a rabbit out of the hat.
He informed the selection committee that John Giles, who had earlier declined to go forward, had changed his mind.
Before the audience had time to digest the shock news, Casey dropped another bombshell. Bob Paisley had also changed his mind, and was ready to take charge.
The former Liverpool boss duly topped the poll on the first count, receiving nine votes, and the other candidates received three votes each. Paisley now required but a single vote, to become Irish manager.
A second ballot was now required to eliminate a candidate. While Charlton appeared the obvious one to be eliminated, there was general surprise when Liam Tuohy emerged as the man voted out, making it a three-horse race.

After the the third ballot vote, Paisley was still out in front, on nine votes. Charlton had five, and another ex-Irish boss, Giles, was on four. The next vote was supposed to be the final act in the drama, as it boiled down to either Paisley and Charlton. Paisley was by now a dead cert to lead the ‘Boys in Green’.
On the final vote of a long and dramatic evening, Ireland had a new international soccer manager, but it was not Bob Paisley. One of the members of the FAI Council had abandoned Paisley, and had defected to the Charlton camp. The Tuohy and Giles group had also transferred their allegiance to Charlton.
Charlton somehow had prevailed by 10-8. He was duly elected as manager of the Irish team, this despite the fact that he had secured only 16% of the vote on the first ballot. Ireland’s new international manager had been elected not by design, but by default!
The great man himself had not expected to get the job, and could not be contacted.
The FAI held a press conference to announce the appointment, while trying to locate the missing Geordie. Former college, Jimmy Armfield, tracked Charlton down to a hunting lodge in Cloverdale in Yorkshire, to give him the news. Charlton’s appointment was announced on the Late Late Show by host Gay Byrne, and was greeted by total silence!
Charlton who had once famously applied for the England manager’s job, and never received a reply, never actually signed a contract for his time in charge of the Irish team.
The rest as they say is history. Or maybe the luck of the Irish!