In the late 1950’s and early 1960’s Dolores Hart was a young, beautiful and talented actress who had starred alongside the likes of Elvis Presley, Anthony Quinn and Montgomery Clift. It seemed accurate to say that the sky was the limit for her Hollywood career. Then, she made a shocking decision: Dolores Hart entered a contemplative monastery to become a Benedictine nun. Now, 50 years later, on the heels of an Oscar-nominated documentary about her life, the public is rediscovering the woman now known
as Mother Dolores, writes Gemma Grant.

THIS YEAR Mother Dolores Hart celebrated 50 years of religious life at Regina Laudis convent in Connecticut, USA. Mother tends to stand out from her Sisters, thanks to the black beret she sports on top of her veil. She was given permission to wear the beret when, as a young nun, she informed Mother Benedict that her head was cold following. the removal of her blonde tresses. 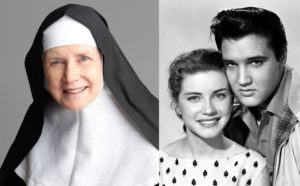 Her blonde hair was not the only thing Dolores would part company with. While still in her early twenties, Dolores Hart turned her back on a promising career in Hollywood to take religious vows.

From childhood, Dolores longed to be a movie star, like her father Bert Hicks. She wanted nothing more than to follow him into the movies. Dolores described her teenage parents as beautiful people; her father had a strong resemblance to Clark Gable and her uncle was none other than Mario Lanza.

When her mother was pregnant, Dolores’ grandmother advised her to abort the baby as she considered the teenage parents too young to have a baby. Thankfully, Dolores was born and spent the early years of her life living with her grandparents while her father pursued his career in Hollywood.

The first encounter the young Dolores had with the movies was helping her projectionist grandfather. When he would fall asleep during the movie, Dolores was instructed to wake him up in time to change the reel. She remembered with glee, that her grandfather would reward her with a nickel.

While living with her grandparents Dolores, a non-Catholic, attended Catholic school. She was intrigued to see her friends receiving the ‘bread’ during Mass and afterwards they would be given chocolate milk and cookies.

Dolores longed for the chocolate milk and cookies more than anything and asked her teacher if she could receive the ‘bread’ so she would qualify for the treats. The teacher was delighted at Dolores’ request to receive Communion and enrolled her, with granny’s permission, in the Catechism classes.

When Dolores asked her grandmother if she could become a Catholic, she didn’t object as she considered it would do no harm. Dolores later recalled with humour that God reached her through Chocolate milk.