This Mother’s Day, Philomena Hearne pays tribute to her centenarian mother who has lived through some remarkable times in Irish history.

These were historic times: this era marked the end of the haemorrhaging of young Irishmen to France, ie: the battle of the Somme. Foreign fields – a senseless cause.
It was in this epoch that Catherine was born into a comfortable family home in Ballymcquinn, in Ardfert Parish. 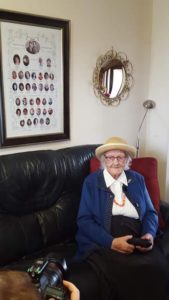 She was the eldest of seven children. Her parents, Patrick and Margaret, worked a small farm which was well stocked with animals and fowl of many kinds. They were an industrious twosome. Her father had a hobby in bees, taking care of fifteen hives daily.
About this time, a number of engineers from Newcastle-on-Tyne came to the area. They set up a wireless station beside her father’s home and were hiring suitable people for this work. Catherine’s father was given the position of accounts clerk for this Company, The Wireless Telegraph Company.

There were other branches of the company in Killmoyley, and Ballinskelligs. The main one was on Valentia Island – the Trans-Atlantic Cable Station. Catherine’s father worked there later on, when after few years it wound up its operations. Radio came in, and there was no further need for these pioneer stations. Her father was the caretaker for some time until the land was sold and distributed, among local farmers.
The country was poor at the time, trying to recover from the aftermath of the lean years and the Civil War which split many families.

At the age of eight, Catherine attended the local school at Banna along with her sister, Ellen. Their father would not allow his children to begin school until it was reasonably safe to do so. They were troubled times, and the roads were cut and damaged.
In 1924, the Free State Soldiers were trying to set up and maintain a system of Order in the Country.Order born from chaos. There were skirmishing groups of Auxiliaries prowling occasionally, even though they were supposedly gone at that stage. This group replaced the ‘Tans’.

They did their worst from 1919 to 1921. Catherine was placed in first class in her school because she was knowledgeable, and fast at learning.
She and her sister were one month at school when some soldiers of the Free State Army came to search the school, possibly for fugitives.
They promised the teachers that they would not harm anybody. The children were scared, as indeed were the teachers. Nothing was found.

Catherine remembers many events which took place. There was one event during the Civil War, when her parents pulled the children from their beds, after midnight, and placed them lying on the floor beneath the windows (which were high) for safety from the bullets. The rebels had picked on a few houses in the neighbourhood. Gunfire was heard, though distant.

Their father was protecting his family, after some hours gunfire ceased. The walls of their house were strong and secure.
Some years later, reconstruction work was done on the roof of their dwelling house, and spent bullets were found there.

On a previous occassion, Catherine’s uncle was digging potatoes in his garden at the rear of their house when he heard a sound. Something whizzed past his ear. He hid in the furrow between the drills of potatoes, and managed to crawl snake-like to the bottom of the garden, and thankfully to safety.

This story was related to Catherine some time later. She was three years old when these events occurred circa 1919.
We have a few stories that are associated with those times also.
While standing at the front door of her home, she witnessed an army vehicle moving slowly past her home, going toward Ardfert. Her father raised her up on his arm, and said, “That is an army vehicle. There is a soldier in front with the driver both were standing.”

The vehicle moved slowly. Their patient was a severely wounded soldier. His bare feet were visible and bloody. Catherine was scared and deeply saddened at this. He was an Army Officer who was shot at the Clashmaolcan Caves, at the time.

Catherine stayed for a time with her grandparents in Ardfert, and attended school there. Her grandmother was a widow. Her brother came to stay with her from time to time. He retired from his work in America where he was a librarian. He liked reading, writing and arithmetic. He especially liked Euclid.

Catherine was still attending primary school in Ardfert. Her grand-uncle organised some lines per day for her to memorise from the epic The Deserted Village by Oliver Goldsmith. He gave her a half-crown, at the end of a number of lines, until she knew them well. There were many epics.

She also memorised the Gettysburg Address. All the American Presidents etc. Catherine was a great storyteller. She loved to read history and she read widely.
In her latter years, she needed stronger lens, that hasn’t stopped her – just slowed her somewhat. She likes to wander down memory lane often. We were informed that there were no white weddings at that time. People getting married, wore clothes of their own choice. They dressed very neatly, in their new clothes.

Recently she informed us that she was not dressed up in a beautiful white dress for her First Holy Communion, like the children have in our generations. There were no formalities.

The children then were obliged to know and answer certain questions, from the penny Catechism, and prayers, and if they did not know these, they were not given a ticket. and could not receive their first Holy Communion.
The children were dressed in their ordinary clothing.

Catherine attended Domestic Science Classes, which were organised in neighbouring towns at the time. This involved basket-making, lace-making, needlecraft and cookery.

This is but a mere sample of her life and times.

I include here, some lines from Oliver Goldsmith’s famous poem.

In all my wanderings round this world of care,
In all my griefs – and God has given my share –
I still had hopes, my latest hours to crown,
Amidst these humble bowers to lay me down;
To husband out life’s taper at the close,
And keep the flame from wasting, by repose;
And as a hare, whom hounds and horns pursue
Pants to the place from whence at first she flew,
I still had hopes, my long vexations past,
Here to return – to die at home at last.