Myths & Legends – Balor of the One Eye

One of the most breathtaking views (of many) that Donegal has to offer, is surely the view of the Poison Glen, as seen from the foot of Errigal, Donegal’s highest mountain. Perhaps a misnomer, to describe such scenic beauty as ‘poisonous’, if it were not for the legend that attributes the name with Balor of the poisonous eye.

Other explanations for how the Glen got its name have suggested it derives from a poisonous plant that grows locally and was believed responsible for the deaths of English soldiers who on one occasion, camped in the Glen. 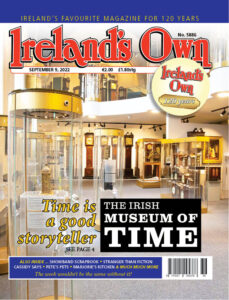 A third possibility, is that the early English cartographers, knowing nothing of the Irish language and with no intention of learning it, made a mistake. Not being able to differentiate between the similar sounding Gaelic words for Poison and Heaven, used the Irish for Poison instead of Heaven.

To describe the area, justifiably so, as the ‘Glen of Heaven’ would detract from the makings of a good legend. Balor of the One Eye, was no heavenly creature. From the race of the fearsome Fomorians, Balor, likened to a gigantic cyclops, battled his way through Irish mythology, striking fear and terror into all who opposed him.

The Fomorians are described, largely, as a race of evil looking, hideously deformed monsters. They too, like their nobler counterparts, the Tuatha Dé Danann, possessed supernatural powers.