Myths & Legends – The Children of Lir

Gemma Grant continues her series on Irish myths and legends

The small chapel was almost complete. The only thing missing was the bell that would be delivered to the old hermit later that evening. Inish Glora had been home to the old monk and its solitude suited his ascetic life style.

His only regular companions were four beautiful swans that often approached for small crumbs of bread, that the monk gladly shared with them. His feathered companions allowed him to stroke their beautiful long necks and would often cluster around the old man like domestic pets.

When the boat approached carrying the bell for the chapel, the swans swam a safe distance away, leaving the old monk to take delivery of his treasure. Once installed, the boat man departed and the monk rang loud the bell of devotion.

The strange song of the bell resonated with the swans. It rippled along their bodies, penetrating the spell that had held them captive for nine hundred years. Like soldiers in a trance, the swans four abreast, made their way to the water’s edge and followed the strange sound. 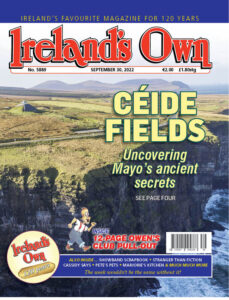 When the old monk finished ringing the bell, he left the chapel, but was surprised to see the swans sitting outside. “I suppose you are looking for more food,” he said.

“No. We are now free.” The voice was that of a young girl and it came from the largest swan.
The old monk stumbled back as though struck by an invisible force. He clutched tight the cross about his neck and blessed the space between him and the swans. “Depart from me you infernal spirits,” he commanded.

The girl’s voice spoke again. “We are not elemental spirits. We are the Children of Lir and you have set us free.”
The old monk repeated the words almost to himself, “The Children of Lir, but you are mere legend,” he said.