The frail, pain-ravaged, crippled woman who authored one of the biggest-selling books in the English language, wrote most of it in pencil whilst lying on a couch. She began writing it in her fifties, using a discarded accounts ledger and slips of paper. It took six years to finish.Her mother, a pious, kind, and gentle woman, transcribed the pencilled material. 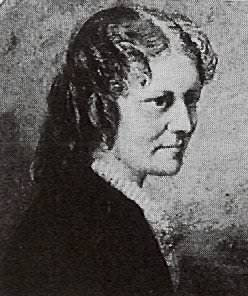 The author was Anna Sewell. Her pet name was ‘Nannie’. Her novel was the much loved and highly influential Black Beauty: The Autobiography of a Horse. The publishers gave her a miserly £20 for it. It was the only book Anna ever wrote.
Black Beauty has sold over 50 million copies. It is the sixth most popular work in the English language, has never been out of print, and has been translated into Japanese, Italian, French, Hindustani, Spanish, and many other languages. Three films have been based on it, as well as countless television and radio shows.

Anna Sewell never intended Black Beauty to be considered purely as a story for children. She wrote it to highlight the treatment of horses in the 19th century. Its special aim, she said, was “to induce kindness, sympathy, and an understanding treatment of horses”. She was conscious that the animals were used to haul barges and carriages, to haul granite and coal, and to carry loads that damaged their legs and hoofs on the cobblestoned streets of towns and cities.

Anna died in 1877 in Old Catton, near Norwich, just five months after her book first came out. She was 57, and passed away from suspected peritonitis, tuberculosis, and depression. But she had lived long enough to know that the book was a bestseller. By the time she died, 30,000 copies had been sold.

“The book has lived,” someone said, “(But) the author has been forgotten.”
Anna Sewell was born in Great Yarmouth in 1820 to Quaker parents, Isaac and Mary Wright Sewell. They had a son, Philip, two years after Anna was born. The family then moved to London.

One afternoon when she was 14, running in the rain, Anna slipped and fell awkwardly, injuring her ankles. Mistreated medically, they never healed. The result: Anna was condemned to a lifetime of never-ending excruciating pain. She was never again able to walk properly, or stand for longer than minutes at a time. The few steps she was able to make could be accomplished only with the aid of a crutch.

Her mother, a best-selling writer of moral tales and ballads for children, looked after Anna’s education, mainly at home. The works of Tennyson, Wordsworth and Shakespeare fascinated Anna. She helped her mother to edit the little books that Mary wrote.

Anna learned to ride horses at her grandparents’ farm in Norwich, where she grew to love the animals. Eventually her mother bought her a pony and trap to help her get around in the outdoors. She trained her pony to respond to verbal signals, and never she resorted to using a whip. 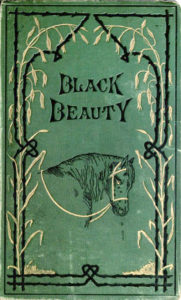 Isaac, Anna’s father, was a poor businessman, and the Sewells stumbled from one financial crisis to another. He finally got a job as a bank manager! But it was Anna’s mother’s income from writing that financed the family for years. She earned enough to be able to take Anna to spas in Europe for hydrotherapy, and to visit German and Spanish doctors, trying to find a cure for Anna’s crippled legs and feet. Sadly, none of it worked, though on one trip Anna met the poet Tennyson. Mother and daughter grew ever closer in their relationship. They went frequently to the workhouse in Brighton where they laboured to help the poor.

In 1864 the family moved to Old Catton, a village in Norfolk. Anna’s health had been deteriorating steadily, and when she was 54 and had become too weak to leave the house, they sold her pony and trap. That was when she began writing Black Beauty.
She decided to write the story from the horse’s point of view — “translated from the equine”, as she playfully suggested. It was a remarkable literary device. “We call them dumb animals,” she said, “ and so they are, for they cannot tell us how they feel, but they do not suffer less because they have no words.”

Anna Sewell had an abundance of words of compassion, a love of horses, a fine command of English, and those cherished qualities, sincerity and integrity. She employed them all to produce one of the best-loved classics of literature.
“There is no religion without love,” she wrote, “and people may talk as much as they like about their religion, but if it does not teach them to be good and kind to man and beast, it is all a sham.”

Read Liam Nolan every month in Ireland’s Own