Night of the Blue Lady

It was my first ever Dress Dance. Not belonging to the generation who were treated to graduation balls and parties, I was coming a wee bit late to the affair.

I was thirty-two, and our local Resident’s Association had decided on an annual dinner and dancing event in a posh hotel forty miles away. 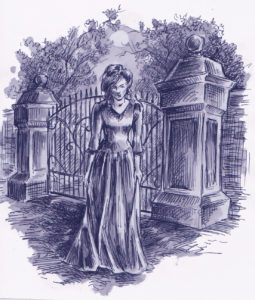 We all, that is myself, husband, Stevie, and the other residents of Primrose Estate travelled there in a hired coach. We two were seated towards the front and admired the mountainy landscape we were driving through more than we noticed those who were with us on this journey or what finery they were wearing.

Of course all the men sported bow ties and, as was fashionable at the time, the women donned ankle length dresses. Mine was a cream and fawn concoction which flattered my auburn hair and hugged my hips. I really liked it.

There was a scramble as we left the coach and entered the hotel. We greeted Jerry and Barbara who were nearest to us and ended up sitting beside them.

The meal was first class, three delicious courses and with sorbet in between, but it was only when the dancing started that we began in earnest to mingle and enjoy the company of all our neighbours and friends.

I was doing well. Stevie is a class-act dancer and we both loved the old-time waltzes, and the quick steps and tangos. At one stage we even led the dancing on an empty floor and received a round of applause for our efforts. A little bit of Céilidh followed, and we managed that too, but it was during the ‘communal dances’, the ones where the music stopped and we had to change partners several times, that I was overcome by a vivid memory of that journey from Kerry to Dublin twenty one years earlier.

It was the DeLacy woman who did it. I ended up opposite Ruth DeLacy who was wearing a cornflower blue dress with black trim, three-quarter length sleeves, a tiny pinched waist and a full skirt – startlingly like the one I saw on that other woman all those years ago.

You see, my father was friends with Pat King, an undertaker who ‘looked after’ many of the citizens of the Kingdom of Kerry.

If a Kerry person died in a Dublin hospital Pat would drive his hearse to Dublin, stay with us for the night, and bring the deceased back home next day.

It didn’t happen every week, but it was a job he was required to do a few times a year. So when old Winnie O’Shea died in Dublin in late August – while I was on holidays with my father’s people outside Tralee – it was thought to be a good idea for me to travel home to Dublin in Pat’s hearse, in the front passenger seat of course, and so be delivered safely and without the cost of a train fare to my own front door. I was, after all, due back in school in less than a week.

And so it was that Pat stuffed my little suitcase in behind the passenger seat and he and I set off.

It was late. Pat had already worked more than a half day around the town, so we would be driving in the dark a lot of the time. My parents were aware of this apparently, but it was no matter. The roads were quiet in those days – late fifties – and it would be a peaceful ride. The little girl would probably go to sleep the moment the car began to move, and sleep on next morning, they all believed. Indeed that’s what they had planned. However, the ‘little girl’ turned out to a lively companion to Mr Pat during the early part of the journey. He was a fatherly type and I managed to keep the conversation going, commenting on everything we passed and asking questions galore.

“Yerrah girl”, he said at one stage, “you must have your parents and teachers demented with all those questions. Do you read a lot?” He was smiling. There was no irritation in his words, but more than a hint of amusement.

I told him I did read a lot. I also said I loved looking out the window as the fields and mountains swept by, and the rivers and forests.

Sometimes, I confided, I thought I’d like to live in the countryside and not in Dublin at all! Pat chatted away for a while too, of the time he lived in England in the big city of Birmingham, and of his own longing for home. Gradually we both lapsed into silence and I did not notice how rapidly night descended until I spotted the car lights sweep the road ahead of us and deeply probe the high hedges.

The sound of the engine had a soporific effect and I believe I nodded off. Years later I realised I must have slept for an hour or so, and only woke when I heard Pat yell and swerve towards the left side of the road. There was a lady there, right in front of a big iron gateway that looked like it had not been opened in a century, and she was waving at us.
“We better give her a lift,” he said to me in a rush.
“But where will she sit? There are only two seats.”
He indicated the space behind me. “Back there with you girleen,” he suggested. “Sit on your suitcase for a while. I doubt she will be going far in that outfit.”

I thought the outfit odd too. It was the middle of the night. She was alone. It had probably become chilly by now and she was wearing no coat, only this amazing blue dress, gathered at the waist and with a full skirt down to the ankles. It had a fancy black lace trim around the neck and sleeves. But I did as I was told, scrambling into the back as Pat opened the door. Silently the stranger stepped in and sat down in the seat I had kept warm for her!

Not a word was said as Pat turned on the engine and we moved off again into the darkness.

Returning to the Resident’s Association dance – everyone was dancing with everyone now. Whoever happened to be nearest when the music stopped became your partner. And Ruth DeLacy was closest to me when the music ceased right in the middle of the Blue Danube Waltz.

Aware of her presence nearby, a huge panic burst over me. The blueness. The black lace. I knew I needed to get away, to flee to the loo or sit this dance out. The revolving crystal lights that gave this ballroom its famous movement and style now made my head spin.

Something seemed to take the air away. I struggled for breath. It was only when I was sitting down in a quiet corner that my heart quietened. A near neighbour came across and offered to fetch me a brandy. I gladly accepted. Something to take hold off, to steady my nerves, to banish the alarm far away.

What you remember is only part of what there is. I could not relax while sitting there in the back of the hearse. And the absence of conversation made me anxious.
Pat made a few casual remarks, where was she going, wasn’t it late, was she all right, that kind of thing – but there was no response. The car too had suddenly become very cold.

I had to take a cardigan from my suitcase and put it on to stop the shivering in my limbs.

She seemed impervious to the cold and it was only when we spotted the ruin of an old gate lodge in the distance and saw her gesture for him to pull in, that there was any communication at all from her. Pat slowed down, bringing the hearse to a gentle stop.
He was just about to step out and to go around and open the door for her when she suddenly vanished, wafting through the door and into the misty darkness beyond.
He wouldn’t be permitted to do so now, of course, but Pat took a few sips from a little hip flask which had nestled in his pocket. I opened the car window.

I think I wanted to clear out her essence, to disremember her.

I needed to pay attention to the pale rising sun and the street where I played with my friends. I longed to be home.

For years afterwards he relished telling that story, did Pat King, emphasising how the place where he had picked her up was probably close to the cemetery gates. My parents heard all about it before he bedded down at about five am. I tossed and turned and felt the cold all over again, even with two woollen blankets wrapped around me.

There was a subsequent story; it emerged in the following months after a bit of digging around in the local history of that area. Our ‘blue lady’ was of the Big House and had died during the famine. Apparently she was to go to a Grand Ball one night in 1846, and to become engaged to the eldest Godfrey from the next townland. However, when one of her tenants took ill the child’s parents sent to her for help. She did not hesitate. Still dressed in her blue ball gown, she rode her mare across five fields until she reached the child’s house. She had taken with her some medicinal potions to reduce the little girl’s fever.

The story goes that when riding home her horse became spooked and tossed her into a tree trunk where she lay until morning, deeply unconscious. She died next day. They buried her in that ball gown, in the Godfrey plot where she would have lain had she become Norman Godfrey’s wife.

It seems that little Ellen Ryan survived the famine, emigrated to the US and became a successful teacher there. The gate lodge, where the Blue Lady (or her ghost, dear reader) asked to be dropped off was the front entrance to the Godfrey estate. It was suggested that she was spending eternity attempting to return to the Ball.

I took time shaking old Pat King out of my head. And when he came to stay with us he was not allowed to recount his eerie tales to us children prior to our going to bed. My parents stuck to news of their friends and relatives back home, and of the football and whether Kerry was going to win the All Ireland that year. Safe, un-supernatural topics!
I did apologise to Ruth DeLacy for running away from her that night. She was very gracious. She swore she hadn’t noticed. She was sure I was just a wee bit breathless after the Ceilidh dances and needed to rest up. Within a year or two maxi dresses were no longer fashionable.

Instead many of the women wore those proverbial; ‘little black numbers’. I sported mine at the next Resident’s Ball. Ruth too!