In far back times, when March was the first month and before January and February were added to the calendar, October was the eighth month, and this explains its name. 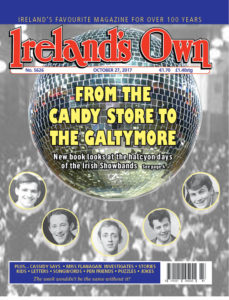 We were well settled into school by the time October came. We had got used to homework, teachers and I suppose if we were prepared to acknowledge it, we enjoyed the idea of returning to school.

Of course no pupil would dare to make such an admission. It was much safer to go along with the accepted theory that the classroom was a form of torture invented by grownups to punish young people and it was the unanimous opinion among us that there was nothing wrong with teachers that a firing squad wouldn’t cure!

We hadn’t any real cause for complaint however. From what I’ve heard, there were quite a few pupils in our generation who would have had far less happy educational experiences than we had, but that topic is for another day. I can only speak from a personal point of view when I say that our teachers, Sheila Cloonan and Mrs. Cogavin, were kind and helpful.

PULLING THE WOOL OVER THE EYES OF THE TEACHER?
Parents supplied turf to heat the school. (Incidentally, it was expected that parishioners would supply the priest with turf also). We regarded it as a bonus when called upon to help unload it and throw it into the turf shed. In our reunion book, Making Shapes with Slates and Marla, John Kenny from Cappalusk, describes how students from Shanballard School used to exploit the situation.

Turf would normally delivered early in the day and the Shanballard pupils used to take two or three hours to unload it. In fact, John said that for every sod brought in, another one would be brought out and thrown on the ground. Eventually the teacher took a hand in things. One day a load of turf was delivered in the morning and immediately there was a surge of volunteers offering to unload it. However the teacher insisted that it would remain where it was until evening.

The volunteers were told to put the turf into the shed late in the afternoon. The job was done in record time and there were no undue delays in unloading and storing fuel in Shanballard from that time forward!

ROOTING OUT THE SPUDS
Potatoes were the main crop in our parish although there was a small number of beet growers too. Beet inspectors checked on produce to ensure that it reached a certain standard. The same applied to those that grew potatoes for export. We didn’t fall into either bracket.

We just sowed enough root crops to supply the needs of the family and livestock. When acreage was small so was income and in practice that meant that each smallholder had a limited amount of machinery so the planting and reaping of crops depended very much on cooperation between neighbours.

We were lucky in that regard. We could always count on neighbours to give us the loan of a horse, plough or other such implements when we needed them. In return we gave payment in kind or more often than not, we would help by providing manual labour to the person in question.