Older Than Ireland – Secrets of our Centenarians

Thirty people who were alive in 1916 opened up to film-maker Alex Fegan for a landmark documentary that covers a hundred years of life in Ireland, but their own life stories were the most fascinating, writes Eileen Casey.

One of the televisual gems of recent years is Older Than Ireland, a low budget documentary by Snackbox Films, distributed by Element Pictures (2015) and directed by Alex Fegan.

Since it aired on RTÉ television in late August 2016, the stars of this charming production continue to enjoy celebrity status. The film is especially significant for featuring men and women who’ve lived through the birth of the State, witnessed Civil War, technological advances and their effect on day-to-day living (washing machines, computers etc.). 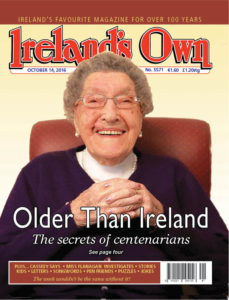 It’s an historical and social portrait, taken at a particular time, paying tribute to the outlooks of those who have gone through a broadening out of life in general, simplified in the expression ‘a car at every door’.

There are political resonances also. For example, Jackie O’Sullivan from Killarney met Michael Collins and Éamon de Valera, while Jimmy Barry from Waterford witnessed the 1920 Bloody Sunday Massacre when he was aged just nine.

From start to finish, watching Older Than Ireland is a time travelling experience. The centenarians take us on a journey back to a distant past, recalling, among other things, memories of first shoes, first kisses, school days, work, romance, marriage, what reaching 100 means and of course the inevitable question concerning the afterlife.
It’s a journey that recaptures the magic and thrills together with the emotional pain of grieving the loss of loved ones.

Older Than Ireland brings laughter and tears in equal measure. Dolly Atley’s first shoes are forever bound with the circumstances of her father’s death. He had gone to market with his pony and cart, promising the one-year-old little girl that he would bring back ‘a new pair of shoes for his little doll.’

However, on the way home the pony became skittish and jumped into the ditch, killing Dolly’s father. While she sat in her armchair in front of the camera’s eye, she recounted this hugely significant episode in her younger life, holding the little shoes in her hands, faithfully preserved all these years. The shoes, barely the size of Dolly’s palm, seemed so poignant, connected as they are to such a bitter sweet event.

First shoes were certainly big news for most of the men and woman interviewed. Walking to school barefoot seems to have been a common denominator too, described by Kathleen Fosdike from Castleknock as often resulting in ‘big toes without a nail’. Shoes, for the most part, meant prestige and feeling important in a rural Ireland where money was scarce and where style took a back seat to the provision of day to day necessities.
The down-to-earth no nonsense attitude of some of the ladies, in particular, also brought smiles. Margaret Kelly from Ballinasloe described getting the cheque from Michael D, money that was spent on the party that celebrated her 100th year – “and sure if we didn’t get it, we’d have to do without it”. Who could argue with that? When asked how it felt reaching this milestone age, Kathleen’s sister Mary (101) insisted that her life was little different to when she was young “except I have more comfort now as I don’t have to do anything!”

Madge Fanning from Skerries took her centenary celebration in her stride and said it didn’t knock a feather out of her, that she didn’t get excited about it.
Dr Jack Powell from Nenagh, woke up on his birthday and thought he’d better get up, he had a big birthday to celebrate. Dr Powell worked as a vet all his life, not retiring until he was 98. A member of the Church of Ireland (or minority religion as he himself described it), he said he never felt excluded by his Catholic neighbours and when the roof of his church went up in flames, it was those same neighbours who helped put out the fire.