Oliver Pollock – the Irishman who created the US $ sign

Oliver Pollock was born in 1737, in the small village of Bready, in County Tyrone. A hugely successful businessman, he played an important role in financing the US War of Independence against Britain. The Tyrone native is also often attributed with the unintentional creation of the U.S. Dollar sign in 1778.

This remarkable feat was commemorated with the 200th blue plaque erected by the Ulster History Circle in April of this year, when the US Consul-General, Daniel J Lawton, officially unveiled the memorial at the Sollus Centre in Bready on the main Derry to Strabane road. 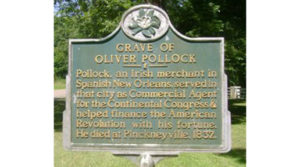 Oliver Pollock sailed to North America at the age of 23 in 1760 with his brother James and his father Jared. They settled in Cumberland County, Pennsylvania. He soon began his career as a merchant based in New Orleans, trading from port-to-port with the Spaniards in the West Indies, and was based in Havana, Cuba for a short time. It was here that he developed close links with the Irish-born Governor-General Alejandro O’Reilly.

Thanks to his relationship with O’Reilly, (who granted him free trade within the city), he became the most successful businessman in Havana as a result of the scarcity of provisions at the time, bringing in a desperately needed shipment of flour.
In 1770, Oliver Pollock married Margaret O’Brien of New Orleans, with whom he had eight children. By the outbreak of the American Revolutionary War, Pollock had become very wealthy and had significant political influence.

The American Colonies turned to a number of sources for backing. Some of the major contributors to America’s independence included the Kingdoms of France and Spain, and, remarkably, Oliver Pollock based in New Orleans.
He saw a golden opportunity to carve out a place for himself in America’s financial landscape. He personally donated 300,000 pesos to the war effort, equivalent to $1bn today.

The primary beneficiary of Oliver Pollock’s finances was General George Rogers Clark, whose successful campaigns across the American frontier, and especially in Illinois, opened up the Northwest for the colonial forces.

However, Pollock overstretched his financial capabilities and accrued a massive debt supporting the American cause in the West and the South–territory that was then handed over to France and Spain for their support during the War.

Pollock was forced to declare bankruptcy in 1782, liquidating his assets and personal possessions. This included the Mississippi River lands near Baton Rouge and Pointe Coupée, upon which Louisiana State University would be built.

The following year, he was appointed an agent by the United States in Havana, where he would be imprisoned for his debts a year later, amounting to $150,000. By 1785 he was released on parole and returned to Philadelphia, and continued his attempts to regain his wealth and stature. There he met a sympathetic Robert Morris, another financier of the war who had also incurred debts as a result.

Congress did not discharge Pollock of his debts until 1791, at which stage he moved back to Cumberland County in Pennsylvania, an area popular with Irish emigrants. His legacy turned out to be hidden in the ledgers he sent to Congress in the hope of recovering money promised to him by the Commercial Committee.

The preferred currency in the American colonies had been the Spanish dollar, also known as Spanish peso, which was commonly obtained through illicit trade in the Spanish Caribbean.

In his ledgers, Pollock abbreviated ‘pesos’ to ‘ps’ and tended to run the letters together, resulting in a symbol resembling a $. The timing could not have been better: it was the intention of the new Secretary of Finance Alexander Hamilton to establish a strong central bank and currency.

Historians have analysed the source of the $ symbol and have yet to find it written down prior to Pollock’s use in his ledgers. His unintentional creation is supported by the fact that his friend, and Washington’s Superintendent of Finance, Robert Morris, chose to adopt the symbol by 1797, and had it cast in type in Philadelphia as the official symbol for the new nation’s own currency.

Oliver Pollock delved into the world of politics in the early decades of the nineteenth century; running for Congress three times. He was never successful on that front despite garnering the popular vote. He retired in 1819 to Mississippi, where he stayed until his death in December 17th, 1823, in Pinckneyville.

All that remains of him is a single gravestone in the defunct Pinckneyville Episcopal Church cemetery. His sole depiction in the United States is an impressionistic bronze sculpture on display since 1979 in Galvez Plaza in downtown Baton Rouge.