For a lot of Hollywood movie makers the formula for Academy Award success was simple: big names + bigger money = lots of statuettes. But in quite a few cases it proved to be a formula for spectacular failure.
Tom McParland recalls some notable flops.

And the loser is…this phrase is never used at the Oscars. Even though losers and winners know their loss or gain has less to do with lack of talent and more to do with campaign money and studio clout. For after the winners are known the losers shriek in three-second TV ads: ‘Nominated for SIX Academy awards!’ Only nominated? A bit like boasting about the number of exam subjects you failed.

My mum, innocently singing along with Andy Pandy and the Flowerpot Men on 1957 television, reflected a similar enchantment that a 40-second Edison movie had on females of the US National Federation of Women’s Clubs in May 1897, sixty years previously. 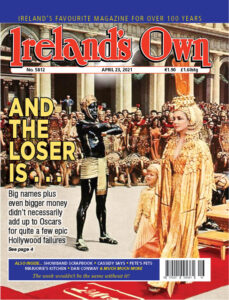 The members at Mrs. Edison’s post-lunch invitation queued to squint through a one-inch aperture atop a wooden box that her husband Thomas had grandly called his Kinetoscope. But in keeping with the name Tom being usually associated with cats, tomfoolery and pig stealing, this Tom’s Kinetoscope wasn’t his but rather his assistant’s invention. Nor was it a world first.

But, as in the best suspense movies, Prince and his photographic equipment mysteriously disappeared while he travelled to demonstrate it at the 1890 Paris Exhibition, never to be seen or heard of again.

Edison, more capable businessman than inventor, knew that 147 affluent females with time aplenty would spread their wonderment gospel of Kinetoscope the length and breadth of America. Their bewitchment predicted future public attitudes to movies. Nobody cared about the perforated workings or percolated invention myths about movie projection. Just the enjoyable delusion of its ability to turn porkies into truth.

Like the murderer announcing to the heroine that he’s going to strangle her. Yet impossibly not before we’re shown her reaction from her murderer’s vantage.

Or love scenes over – hung with lights, boom mikes, cameras, the director, continuity girl, and the makeup man and clapboard operative. The actors manage to conjure up tender words and sighs in a crammed bedroom and a swelling orchestra playing above the wardrobe.

Here are some of these losers that seemed wonderful at the time but in the end turned out to be disguised nul point turkeys.