Owen and the Mummy’s Curse

A story for slightly older kids who aren’t afraid of mummies…!!!!

It was a sun-drenched Wednesday afternoon and Owen was enjoying his favourite lesson in school – history class.

Today Miss O’Reilly was teaching them about the pyramids of Ancient Egypt. “Many people know about the Great Pyramid of Giza which is one of the original Seven Wonders of the World,” she explained, “but what few people have heard about is another much smaller pyramid that was built close to Giza, a pyramid that has its own very interesting secret.” 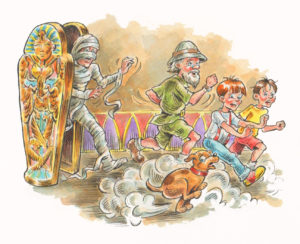 Owen and Alberto, his best friend and time-travelling companion who was sitting next to him, leaned forward in their seats to hear more.

“On May 15th, 1923, just a few months after Howard Carter discovered the tomb of Tutankhamun in November 1922, a lesser-known adventurer named Roger Baxtable entered the smaller pyramid, known today as the Little Point Pyramid. He was travelling with only two camels and a guide that he had hired in a local town.

“When he went inside the pyramid, the guide said he heard Baxtable screaming ‘It’s alive, it’s alive,’ before the entrance of the pyramid caved in, trapping Baxtable forever.
“The guide was terrified and fled the scene,” continued Miss O’Reilly.

“There was a story that had been passed down for generations, that back in the year 2,400 BC, a young princess had been buried in the pyramid. However, she had been engaged to be married to a local prince who couldn’t get over her death at such an early age.

“On the night of her funeral he went into the pyramid demanding that nobody was to follow him.

“When inside, he closed up the entrance with rock after rock so that nobody could get in. His devastated family tried to follow him but he told them to leave him be, that he wanted to stay with the princess forever. If anyone tried to deny him his wish, he said he would haunt them.

“Many local people claimed to have heard strange noises coming from the Little Point pyramid down the years, but nobody had been brave enough to enter it until Roger Baxtable came along. But when he went inside the pyramid in 1923, he was sadly never seen again.”

Owen and Alberto sat listening with their mouths gaping open. What an amazing story. “You know what we have to do, Owen,” whispered Alberto. Owen nodded.
“Meet me at the time machine tonight at 11 o’clock,” he replied.

Owen’s father was a scientific genius, who had invented the world’s first time machine. He spent his life on adventures to many historic times, and always brought back relics which he left, anonymously, for the local museum to exhibit. Nobody knew his identity, but the treasures that he had left in the care of Professor Claude Santropolis at the National Museum of Greek Artefacts had made the museum the top tourist attraction in the whole country.

At 11 o’clock, once the boys were sure that their families were fast asleep, Owen and Alberto met up with Owen’s dog, Noodles at the shed in their back garden. That was where his dad kept the time machine.

Alberto looked a bit nervous, and as the moonlight illuminated half of his face, Owen and Noodles felt shivers run down their spines.

“I realise this is the scariest mission we have undertaken,” said Owen, “but we just have to find out what happened to him once he went inside that pyramid.”

The three intrepid adventurers climbed inside the time machine and Owen set the date on the clock to May 15th, 1923. There was an explosion of blinding light as the machine warmed up and blasted its way into the past.

When the time machine made its crash-landing in May, 1923, Owen cautiously opened the door and took a look around. They had timed it perfectly. In the distance they could see Roger Baxtable, just as he entered the Little Point pyramid.
Behind him, stood his guide holding on to two camels, just as Miss O’Reilly had described. But then the story took a sinister twist!

The guide turned to his right and ushered frantically at two dark figures that crept their ways around the side of the pyramid. The guide pointed at the pyramid and the two strangers sneaked their way inside, ready to attack an unsuspecting Roger Baxtable.
“Oh no,” whispered Alberto, “the guide must have been part of a criminal gang. We have to save Baxtable. Come on, we have no time to waste.”

First though, they had to distract the guide, so that they could get inside the pyramid without him raising the alarm.

“Noodles,” whispered Owen, “do you think you could scarper around and distract the guide while Alberto and I run inside.”

Noodles woofed in agreement and sped off across the golden sand.

The guide jumped in surprise to see this strange dog running between his camel’s legs and the two beasts he was keeping hold of (the other camel belonged to Roger Baxtable) bolted, such was the fright Noodles had given them. While the guide chased after the camels, trying to calm them down, Owen and Alberto slipped inside the entrance to the pyramid. Within moments, they disappeared into the darkness.
Alberto had brought a torch and he flicked the switch.

A ray of light beamed its way down the eerie entrance tunnel of the pyramid, from where the two boys could hear voices.

“Who are you guys and what do you want?” they heard a man shout in a strong English accent.

Owen knew straight away that it was Roger Baxtable.

“Hand over your treasure bag and all the money that you have,” snapped one of the men.
Instantly, the boys knew that Baxtable was being ambushed.
“Here, tie him up with this rope,” the other man ordered.

Owen now realised what had really happened to Roger Baxtable all those years ago. Three thieves had lured him to the pyramid with the intention of taking his valuables, and then left him locked in the pyramid forever. Well this was Owen’s chance to rewrite history!

“Are you ready?” he whispered to Alberto, just as Noodles arrived at his feet. “We’ve got to act fast!”

Owen and Alberto ran up behind the two unsuspecting thieves and gave them both mighty shoves in the backs. The two thieves fell over into the darkness, dropping their lanterns to the ground. Baxtable reacted swiftly, jumping onto them both while they lay on the ground, tying their hands behind their backs.

“Thanks guys, I owe you my life,” he said to Owen and Alberto. “I guess it’s one of the hazards of being an adventurer, always some dodgy character somewhere trying to get their dirty paws on your valuables.”

Owen took a look over his shoulder. “Do you think the Mummy is really down there?” he asked.

“Well why don’t we find out now that we’re here?” replied the adventurer. And Owen shuddered.

Baxtable took the boys’ torch and led them deeper into the pyramid until they came to a dead end. And there, lying across the wall was not one, but two tombs. Baxtable’s eyes lit up. “Could this be what I think it could be?” he whispered, as he stood before the tombs that held the secrets to a piece of famous Egyptian history.

But then, just as Baxtable reached to open the lid of one of the tombs, he heard a groaning sound coming from inside.

As the lid of the tomb creaked opened, Owen, Alberto and Noodles nearly fainted with the fright. An Egyptian mummy pushed opened the door and began to climb out.
“Arrrrggghhhh,” it yelled, and the four adventurers ran for their lives.

They sprinted past the two thieves who were still face-down on the floor, and up the entrance tunnel to the pyramid.

Owen was super glad to see the daylight. Standing outside was the confused guide, who by now had calmed the camels. Baxtable hopped up onto his camel and began to ride away (a camel even moves faster than an Egyptian mummy).

The next morning, Professor Santropolis arrived at the National Museum to find a never seen before picture of Roger Baxtable standing in front of the ancient tombs of the Little Point Pyramid. The anonymous adventurer had struck again! “Thank you,” he whispered, “one day, I’m going to find out who you are…”