Owen and The Olympic Torch – a story for our younger readers

When Owen hears that the ancient Greek God, Zeus, has chained Prometheus to a rock for stealing the Olympic Torch, he decides to go back in time to set him free 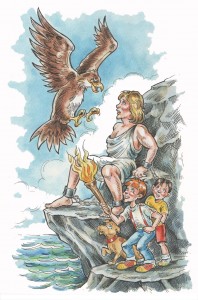 Miss O’Reilly was not having the best of days. Some of the more mischievous members of her class had been acting the maggot all day long, and now she had two of them standing in separate corners of the classroom, as she tried to teach the rest of her wonderful pupils about the history of the Olympics.

“You naughty boys are lucky I’m not the ancient Greek God, Zeus,” she declared, “or else you would have had a punishment far worse than standing in the corner!”

Owen, who, as always, was on his best behaviour, was very interested in what she had just said. “How do you mean, Miss?” he asked quietly.

“Once upon a time the Greek Gods had stopped the people in Greece from having fire and light in their lives. The story runs that the Gods kept it like this so that people wouldn’t become too strong, and be in a position to challenge their power.

“However, a young man called Prometheus sneaked his way to Mount Olympus and stole fire from Zeus. He carried this torch, which would later become known as the Olympic torch, back to the people in the dark caves. There he lit fires for them, and they were delighted.

“When Zeus heard about what Prometheus had done, he was furious. He chained poor Prometheus to a rock, and sent one of his eagles to peck at him everyday.”

The children in Miss O’Reilly’s class were shocked into silence at this revelation.

“Poor Prometheus,” Owen whispered to his great friend, and time travelling companion, Alberto.
“Maybe we should take a trip back in time and help set him free?”
Alberto nodded. This sounded like a great reason to crank up Owen’s dad’s time machine, and set off on another historical adventure.

Only three people in the world knew about the powers of the time machine – the professor himself, Owen and Alberto. Oh, and Owen’s dog, Noodles, of course. Noodles went on every adventure too.

That night, shortly after eleven o’clock, Alberto met Owen and Noodles by the shed in Owen’s back garden. They set the time machine for thousands of years ago and then buckled up, as their latest time travelling adventure got underway. Anyone who happened to look out their bedroom window at that particular moment would have seen the shed light up in an explosion of the most majestic colours, as the boys and their dog disappeared into the past. Then, the shed sat silent in the darkness.

Thump! The time machine came to an abrupt stop when it reached its programmed destination. Owen creaked open the door and had a look around. They had landed at the foot of Mount Olympus.

From the distance they could see a number of the famous Greek Gods lying around, sleeping their heads off after what appeared to be a huge feast.

There were empty glasses of wine, crumbs of food, and lots of animal bones left lying around. On the throne at the top of the table, Owen recognised a sleeping Zeus. “Wow,” he whispered, “he’s even bigger than in the pictures in our history books.”

At the side of the mountain, they spotted another big muscular man, chained to a rock.
“That must be Prometheus,” whispered Alberto. “I’ll get the metal cutters, and let’s go release him.”

Alberto climbed into the time machine and grabbed the metal cutters – it was his idea to bring them with them, and no time could be wasted searching for the key to the chains. The boys knew that if Zeus woke up, then they could very well end up in chains themselves.

They crept up to where Prometheus was sitting patiently on the rock. “Who are you,” he asked, curious about their strange clothes, and the unusual looking beast by their sides.
Owen spoke first. “I’m Owen, this is Alberto, and that’s our dog, Noodles. We come from a land far away and heard about what happened to you. We have come to set you free.”
Prometheus’s face lit up. “Thank you so much,” he said. “I am getting quite weak. Those lazy Gods have a lot of feasts and more food to eat than would feed a whole town, but  they only throw me a crust of bread and one glass of water every day. They are afraid I will get too strong. And they make sure I use all my energy to fight off that eagle.”

“We heard about the eagle too,” said Alberto.

“Well you can meet him yourself now,” said Prometheus, “for he is right behind you!”

The boys and Noodles spun around, only to see a giant eagle flapping its wings as it swooped towards them. It was screeching as loudly as it could, and the noise it made woke the sleeping Gods. Zeus could hardly believe his eyes when he saw the boys trying to release his prisoner.

“Seize them,” he roared, and stumbled to his feet.

Noodles jumped into action and started barking fiercely at the approaching eagle. The baffled bird, who had never seen anything like Noodles before, changed direction and flew towards Zeus. Alberto grabbed his metal cutters and cut Prometheus’s chains free. Prometheus jumped to his feet and ran towards a shield that was lying at the foot of the banqueting table. He threw it to Owen, “Run for your lives,” he ordered them, “and keep the shield for protection.”

Owen caught the shield and they started running back towards the time machine. “Wooooh, how cool is this,” panted Owen as they ran, “this is Zeus’s very own shield, it’s called the Aegis. It can fight off any weapon that tries to break through it.”
Zeus saw the boys and dog running towards the strange metal object at the foot of the mountain.

He ordered the startled eagle to fly after them, while he raised his hands and powered up two mighty thunderbolts. “You wanted fire, well have some of this,” he roared, and shot the balls of fire in the direction of Owen, Alberto and Noodles.

They reached the time machine in the nick of time, and Alberto and Noodles managed to jump inside.

Owen, who was carrying the Aegis, turned just as the thunderballs were about to strike him. He covered his body with the shield. To Zeus’s amazement, and horror, the balls of fire bounced off his own shield and back in the direction of the Gods themselves. The eagle screeched again, and flew off in the direction of the sea. Zeus jumped under the banqueting table, for shelter, as did the rest of the Gods.

Alberto fired up the time machine, and reset the date for August, 2016.

Just before they disappeared, they looked out the door and saw Prometheus waving to them as he ran into a forest, towards freedom. Then there was another flash of white light, far brighter than any thunderbolt that Zeus could summon.

The time machine was gone.

The next day, at the National Museum of Greek Artefacts, Professor Claude Santropolis found a parcel with a note attached to it, outside the front door. The note read, “To Professor Santropolis, inside you will find something very interesting to add to your collection of Greek artefacts, signed Anonymous.” Professor Santropolis unwrapped the parcel and his eyes opened wider than the Aegean Sea when he saw the Aegis. He recognised it as being the shield of Zeus. Excitedly he took out his phone, and the first of a thousand questions began.