Owen was having one of those days in school that you just cannot beat. He scored an A+ in his Maths test, was top scorer in football training, and now his teacher was talking about favourite subject – dinosaurs.

“Many scientists believe that birds are descendants of the dinosaurs,” said Mrs O’Reilly, to the astonishment of her young pupils, “though unfortunately there is no one alive from 80 million years ago to prove it.”

Owen’s ears pricked up when he heard what his teacher said. His classmates had no idea, but Owen, and his dad, were the keepers of the best secret in all of Ireland.
His dad, who the neighbours considered a bit of a ‘mad scientist’, had created a time machine, one that really worked. He kept it locked in the shed in their back garden. Owen was forbidden to go anywhere near it, but kids being kids, he couldn’t resist being curious.

Unknown to his dad, Owen often crept into the time machine when his parents were fast asleep, and travelled back through time to many exciting places. He met some of the most interesting characters in history from Christopher Columbus to Joan of Arc, and tonight he was planning a trip back to the age of the dinosaurs.

“I’ll get Mrs O’Reilly all the proof she needs that birds are related to dinosaurs,” he thought to himself.

That night, Owen lay awake in his bed, pretending to be asleep, until he heard the snores of his mam and dad rumbling through the house. He opened his bedroom window, and whistled out the secret code. Through the darkness of the still night came a swift response. His best friend, Alberto, who always came on all Owen’s time travelling adventures with him, whistled back that the coast was clear. Owen smiled; every great adventurer needed a first class wingman.

There was one other companion who travelled through time with Owen, his faithful dog, Noodles. Noodles had been pretending he was asleep in his kennel too. When he heard his master coming, he scampered to his side.

Then the three intrepid explorers crept into the shed, and climbed into the time machine.
“Eighty million years ago, here we come,” whispered Owen, and checked that Alberto and Noodles had their safety straps on. “Hold on to your hats boys, it could be a bumpy ride…”

A blinding white light shot into the night sky as the time machine disappeared from Owen’s garden shed.

The boys yelled with excitement as year after year went flashing by in a kaleidoscopic blur. Then suddenly there was a thump, and the time machine bumped to an abrupt halt.
“Where are we?” asked Alberto in a hushed tone, as Owen creaked open the time machine door.

“By my calculations we landed in an area that is known as Mongolia today,” Owen replied, “you see, in the time of the dinosaurs there were no countries, just one big wide open planet.

“Remember, Mrs O’Reilly said that birds are believed to be relatives of the velociraptor and it was native to this area of Mongolia. We need to get close to one and grab a feather from his arm if we can.” 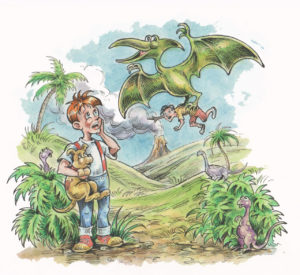 The three adventurers climbed from the time machine. In the distance they could see mountains and trees, and a river with some of the bluest clearest water Owen had seen in his whole life.

“So this is what the world looked like before pollution,” he sighed.

Just then his thoughts were interrupted by a high-pitched screeching sound. He turned around and ducked his head as a flying dinosaur swooped down, grabbed Alberto by the shoulders, and flew away with him.

“Help meeeeeeeeeeeee,” Alberto shrieked, as the dinosaur flew up towards the mountain.

“Wooooh, a pterodactyl,” cried Owen, with a mixture of fear and excitement in his voice, “and he has just dropped Alberto into his nest. Come on Noodles, we need to get him out.”

Owen and Noodles ran towards the base of the mountain where the pterodactyl had taken Alberto. Hiding behind a bush, they watched as the flying dino took off from its nest again, searching for more prey, more specifically…Owen and Noodles!

“It’s ok guys, I’m up here,” called Alberto, as he popped his head out over the edge of the nest. “The pterodactyl thinks I’m one of its babies. She dropped me in here with three more eggs and they are all the same size as me. She even gave me a lick, but I think you guys had better get me out quickly. I don’t want to be here when she realises that I’m not one of her offspring.”

“Ok, stay right where you are. I have a plan,” said Owen. “Noodles, can you run about and let the pterodactyl chase you while I run back to the time machine and grab a rope? Then I’ll be able to throw it up to Alberto and he can climb back down from the nest?”
Noodles nodded his head and ran out onto the open plain. The pterodactyl, who had been hovering in the sky spotted him straight away, and set his sights on the sprinting dog.

Noodles ran like lightning, and led the dino a merry dance. He galloped under tree branches, cartwheeled into bushes, and the dino just couldn’t catch hold of him.

Meanwhile, Owen got a rope, and bow and arrow, from the time machine. He had been on so many adventures through time that he learned what he needed to bring with him to get him out of a tricky situation. He attached the rope to an arrow and shot it up into the pterodactyl’s nest. Unfortunately, the arrow pierced one of the eggs, and to Alberto’s horror, it began to hatch.

“Errrrr,” stuttered Alberto, “I think a real baby pterodactyl is about to be born.”

A tiny cry was released from the egg, and the mother pterodactyl stopped chasing Noodles.

It turned its head up towards its nest, listening for the cry of its youngling, and saw Alberto swinging his way down the rope, like a zip-wire. The sky boomed with the angry roar of the dinosaur. It charged its way back to the nest to check that its baby was ok, just as Alberto landed safely on the ground.

The three time travellers ran faster than they had done in their whole lives towards the time machine.

Once the pterodactyl had seen that its baby was ok, it turned its attention back towards the strange beings that had suddenly entered its world. It fixed its gaze on them, and shooting a war cry up into the clouds, flapped its huge wings. Then it shot downwards, arrow-like, ready to finish its enemies off.

The three friends were just in reach of the time machine when another creature, one that they recognised from their schoolbooks, jumped out from behind a rock.
“It’s a velociraptor,” said Owen, as he stopped in his tracks in awe of this magnificent beast. “I don’t believe it. Look at its feathered arm. Mrs O’Reilly was right!”

The velociraptor, which was around the same size as a turkey, froze. Instead of attacking the strangers, it was a bit wary of them. Noodles saw his opportunity and bared his teeth, releasing a deep growl. Then he started edging his way towards the velociraptor, giving Owen time to yank open the time machine door. As the seconds ticked by, the flying pterodactyl swooped closer and closer to its prey.

“Quick,” cried Owen, “everybody into the time machine.

Alberto jumped into the machine, and Owen summoned Noodles to jump in too. Owen quickly reset the date to the year 2016, and the time machine spluttered into action. Just as they were about to leave, Noodles did one last clever thing.

The velociraptor had scarpered away in such a hurry that a feather had blown from its arm, and landed at Noodles’ feet. Noodles gobbled it up into his teeth and leaped through the time machine door, just as Owen slammed it shut.

There was a flash of white lightning on the open plain, as the time machine disappeared into the future. The pterodactyl crashed into the earth, and stunned itself. It swung its head around, searching for the strange beings, but could find nothing. It squawked, and made its way towards the river, opting to catch some fish for its new-born baby instead.

The next day, Mrs O’Reilly arrived into school and found a nice surprise waiting for her on her classroom table – a feather. There was a note left anonymously beside it and it read…“To Mrs O’Reilly, a genuine velociraptor’s feather from 80 million years ago. You were right about the birds!”

“I knew it,” she whispered to herself, and she felt a warm fuzzy feeling inside. Just then, the school bell rang, and the kids bundled in for the start of another exciting day.