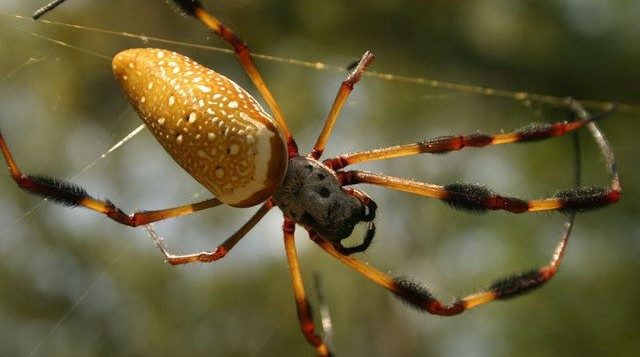 BE NICE TO SPIDERS!

In China they build houses – for spiders! Because the winter kills most spiders, in the rice and cotton fields farmers build small, waist-high huts out of straw where the spiders can safely hibernate. Then in the spring the spiders scuttle out into the fields to kill the harmful insects which feed on the precious rice and cotton plants.

Spiders are an insect’s worst enemy. It’s reckoned that spiders devour enough insects worldwide in a day to out weigh the human population.

The extra ordinary brownish grey Banana Spider lives in warm countries. It likes eating cockroaches and this spider will quite happily keep a house free of these pests.

In Central America the Banana Spider is a welcome visitor, eating insects and small lizards that crawl up the walls.

In California, to increase the spider population, enterprising farmers plant grass between the trees in their orchards. The spiders feed on the moths which would otherwise damage the apples.

Many spiders help farmers protect their wheat fro destructive insects. Weaving their large webs among the stalks, spiders catch the pests as they fall. Although some spiders, like the Black Widow and the Brown Recluse are dangerous, most spiders are harmless to man. Reports of people being bitten by spiders are usually exaggerated.