The arrival of the miniskirt and other women’s fashions in the 1960s distressed Padre Pio, as author Colm Keane discovered when researching his new book Padre Pio: Irish Encounters with the Saint.

Few issues from the 1960s raised people’s temperatures more than the miniskirt. From its inception in the mid-1960s by Mary Quant – who famously named it after her favourite car, the Mini Cooper – to its demise at the end of the decade, the evil of the miniskirt was preached from pulpits, written about in newspaper editorials and even occupied the minds of theologians and psychologists. 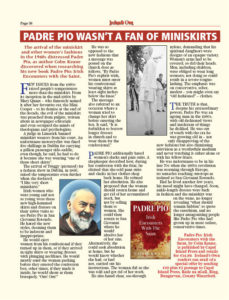 A judge in Limerick banned miniskirt wearers from his court. An unfortunate motorcyclist was fined five shillings in Dublin for carrying a pillion passenger side-saddle, even though, he said, he had to do it because she was wearing “one of those short skirts”.

The arrival of Twiggy (pictured) for a fashion show in Dublin, in 1966, raised the temperature even further when she declared, “I like very short miniskirts.”
Irish women who were young and not so young wore these new high-hemmed skirts and dresses on their 1960s visits to see Padre Pio in San Giovanni Rotondo. He hated the new styles, deeming them to be indecent and inappropriate.