As her latest book ‘Orange Blossom Days’ hits the shelves, the best-selling author, Patricia Scanlan talks to Kay Doyle about life and loss.

Irish author Patricia Scanlan has just released what is set to be another best-selling novel. It’s hard to believe that it’s been twenty-seven years since her first book City Girl first landed on our bookshelves. Since then, books such as Apartment 3B, Mirror Mirror, Foreign affairs and Double Wedding have all been number one bestsellers and it looks like her new book, Orange Blossom Days, will also take pride of place at the top. 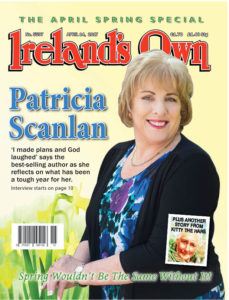 Speaking of the number one position reminds Patricia of her late father Patrick Scanlan, who sadly passed away, aged 90, last December. Her new book will be a different one for her in many ways.

“We were in WHSmith in Stansted Airport many years ago,” remembers Patricia, “and my book was out a couple of months and Maeve’s (Binchy) was out too. Her book was number one and mine was at another spot. Daddy went over and said ‘we’re not having that’ and he started re-arranging the books! Mammy and I just legged it out of the shop. He did that quite often. I had to stop going into bookshops with him,” she laughs.
Having lost her mother Bernie in 2007, the death of her father brought a painful end to customs that Patricia, as a writer, used to have.
“As soon as the early copies of my book would land, I would drop whatever I was doing and go straight up to them and they’d always get the first copy. This year it was awful. It was lovely to get the book but it was heartbreaking for the first time, I couldn’t give either one of them the first copy.

“We were clearing out the house recently and it’s so painful when one parent dies, but the home is still there and the place where everybody gathers still exists. There’s a focal point for the family. When the second parent dies, that’s when you have to clear out the home, and a whole lifetime really, of memories. That’s what we’re at right now.”