Exhibiting the Pearse family Christmas crib every December has become something of a Christmas festive tradition at the Pearse Museum. This year however, it will be even more special as we will display the crib figures for the first time since they underwent a significant programme of conservation. This delicate and nuanced work was carried out by sculpture conservator Jason Ellis, and was completed just in time for Christmas. Jason is also a distinguished sculptor in his own right, so in addition to conserving and repairing the set, he was also commissioned to produce a piece which could replace the lost figure of the Virgin Mary which has not survived. 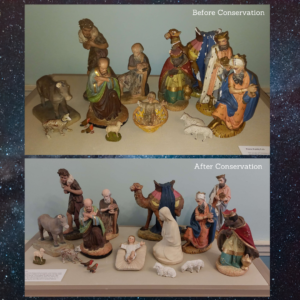 These nativity figures were among the contents of the Pearse family home and were left to the State by Senator Margaret Pearse prior to her death in 1968. She was the sister of Patrick and William Pearse, both of whom were executed for their roles in the 1916 Rising. The crib figures were found in the house stored in a small tin trunk which bore the initials ‘MBP’, presumably those of Mary Brigid Pearse, the youngest of the Pearse siblings.

The original crib figures are mass-produced plaster casts, which were then carefully and delicately hand-painted. These would have been expensive items in the 1880s and 90s when Patrick Pearse and his siblings were growing up in Dublin, and are evidence of the family’s growing prosperity at that time. Patrick Pearse’s father, James, was a successful businessman and had one of the largest monumental sculpture businesses in Ireland by the end of the 19th century.

The conservation work began with specialist cleaning which revealed the original vibrant paint colours under layers of accumulated surface dirt. One of the interesting discoveries made during the process of conserving the set was that two figures were significantly dirtier than the rest, namely the figures of the donkey and the Infant Jesus. It is easy to imagine that both of these would have been particular favourites with the Pearse children and that over many Christmases they became a little grubby due to being handled and played with. As is the case with many Irish family cribs, there seem to have been a few ‘additions’ to the set by the Pearse family over the years, namely two toy sheep and a small grey dog.

Conservation cleaning removed years of accumulated surface dirt and revealed vivid paint colours and previously hidden details. By carefully matching the paint colours, it was possible to address chips and flaking to the original paint layer. Where essential, restoration of lost areas was also carried out. The badly disfigured face of one of the Wise Men was repaired and the broken head of his camel was reattached. The repair of one of the dog’s legs and the reinstatement of the missing tail of one of the robin figures mean both can stand independently once more. However other damage, such as the loss of the donkey’s ears, or the missing hand of the infant Jesus figure, was left as it was in recognition that these losses are signs of the long use of the set as part of the Pearse family’s Christmas traditions.

Perhaps the biggest challenge of the project was how to address the absence of the original figure of the Virgin Mary. Jason Ellis has created a simplified version of the Virgin Mary in a traditional pose appropriate for a nativity scene. The figure’s features have been deliberately left quite blank and it is largely unpainted, with just a light off-white wash to tone down the brilliant white plaster. By adding this piece it is now finally possible to create a recognisable nativity scene while also acknowledging that one of the original pieces has been replaced.

The newly conserved crib figures will be on exhibition in the Pearse Museum throughout the Christmas season.