Peter O’Toole – “as Irish as the Rock of Cashel”

Thomas Myler looks back on the life and career of the legendary actor, who, although born in England, claimed he was as Irish as the River Liffey or the Rock of Cashel.

The scene is the Royal Court theatre in London in the spring of 1959 for the Saturday evening performance of The Long and the Short and the Tall. When the curtains closes and the audience start to file out of the theatre, Peter O’Toole takes his understudy, a then unknown Michael Caine, on a night on the town – only for the two of them to blank out.

The last thing the young Cockney actor remembers was tucking into a plate of egg and chips at a nearby restaurant.
When they awake from their drunken slumber in a strange flat, it is broad daylight. Caine enquires what time it is. “Never mind what time it is,” says O’Toole, wiping the sleep from his eyes. “What bloody day is it?” It turns out that it is five o’clock in the afternoon of the following Monday, and they are due at the theatre at 7.35 at the latest for an 8.00 curtain call. 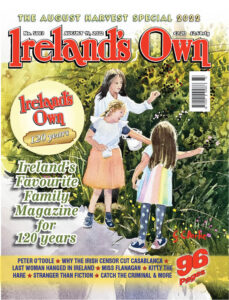 Caine would say in his memoirs that he was shocked to discover that they had spent two nights painting the town, and neither of them could remember anything about it.

Back at the Royal Court, the stage manager informs the pair that the restaurant proprietor has banned them for life from his establishment. Caine is about to ask what they had done when O’Toole whispers, “Never ask what you did, Michael. It’s better not to know.”

O’Toole was the last of the hell-raising actors who ushered in the swinging 60s and was almost as famous for his drinking as for his dazzling blue eyes and his many fine movies.

As with his peers and drinking buddies Richard Burton, Oliver Reed and Limerick’s Richard Harris, much of his best work seems to have been done under the influence.

“We heralded in the 60s,” he once said. “Me, Burton, Harris, Reed – we did in public what everyone else did in private then, and does for show now. We drank in public, and made no bones about it.”
O’Toole would outlive all three. Burton died at 58, Harris at 72 and Reed at 60. O’Toole passed away at 81. This year marks the 90th anniversary of his birth – August 2nd 1932.

There’s always been a mystery as to the country of O’Toole’s origin – Ireland or Britain. Even in his memoirs published in 1992, he does not make it clear.

But his birth certificate clearly states that he was born at St James’ University, Leeds on 2nd August 1932. In any event, he always said he was as Irish as the River Liffey or the Rock of Cashel.