FRANCIS KAYE recalls a healthy, cheap and innocent pastime of the 1950s

A healthy, innocent and cheap pastime when we were growing up in the 1950s was boulie racing. A ‘boulie’ (rhyming with the surname Howley) was simply an old bicycle tyre. No need to buy a cartridge or to download an app on your phone back in those days, all you had to do was find an abandoned bicycle tyre and a strong stick, about 12” (30 cm.) long. 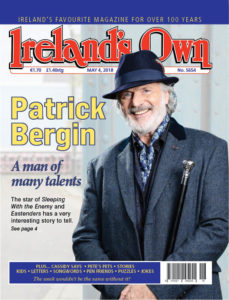 Boys would gather, usually on either a flat stretch of a quiet road (weren’t all roads quiet in those days!), or a slight incline. They would line up beside each other, holding the boulie with one hand and the stick in the other, touching the boulie low down so that a swift, upright movement of the stick would send it rolling at speed, hopefully in a straight line.

Girls weren’t left out either – they were allowed to shout “Ready, steady . . . GO!” and the boys and their boulies were off!

Controlling the boulie at speed required a fair amount of concentration, dexterity and co-ordination so inevitably, there were crashes and pile-ups. This usually ended up with some poor unfortunate being blamed for being the cause of the ‘favourite’ falling and choice words would be exchanged.

I never saw any blows been thrown though as before long, the second race on the day’s card would be under way.

The races usually ran for about 80 yards, depending on the setting and the hope that a bicycle, a pony and cart or (God forbid!) a car didn’t come around the corner soon after the start. Two or more girls might be dispatched to the finish to record the winner and runner-up and to keep an eye on any possible cause of disruption.

Occasionally, the girls might have their own race accompanied by loud jeers from the boys if they all lost control of the boulie in the first 10 yards of the race!