Author Conor O’Brien has always had a fascination with all things prehistoric. In his new book Life in Ireland: A Short History of a Long Time he guides the reader on a journey around Ireland to explore the history of natural life here, from the Jurassic Coast of Antrim to the great Ice Age bone-beds of Cork.

In 1715, construction workers building a flax mill in Drumurcher unearthed some massive and unusual bones. Among them were strange, grooved teeth reminiscent of those of elephants – the last creature you’d expect to find in rural County Monaghan.

This would not be the last time such gargantuan remains were uncovered in Ireland. In 1859, huge bones were paraded through the streets of Dungarvan, County Waterford, by workers who had uncovered them at a limestone quarry in the nearby Shandon Cave. These bones dwarfed those of any wild animal living in Ireland today. So, what did these monstrous remains belong to? The woolly mammoth, one of the great icons of prehistory. 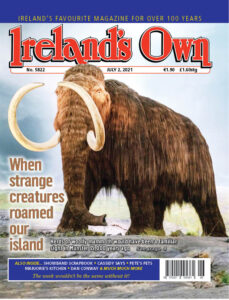 In the intervening years, subsequent fossil finds confirmed that the mammoth ranged across Ireland. As well as the Shandon mammoth and the bones at Drumurcher, mammoth remains were unearthed in Castlepook Cave, County Cork, part of which was christened Elephant Hall, dating from around 35,000 years ago.

Ireland’s wildlife has gotten quite a lot smaller since then. The largest land animal we have today is the red deer. Weighing in at up to 225 kilogrammes, the stags make for an impressive sight when they begin their autumnal rut in Killarney National Park.

But the woolly mammoth could get more than twenty-five times larger than even the largest red deer stag. Their long, shaggy coat – nearly a metre long – helped them keep warm through the worst of an Ice Age winter, while three-metre tusks made short work of any snow that stood between them and the grass they needed to eat for eighteen hours out of every twenty-four. They probably traversed the Ice Age plains of Munster in matriarchal family groups, much as their elephant cousins still do in Africa and India today. What a spectacle that must have been.

As impressive as they are, our mammoth bones are just a small part of an Irish fossil record that traces back hundreds of millions of years. During that time, some truly astonishing animals have left their mark here: armoured dinosaurs, huge marine lizards, shelled sea monsters, terrifying predatory fish, crocodile-like creatures lurking in prehistoric swamps and giant deer, just to name a few.