It was one of the quietest times of the year for us. Once the first week or two had passed, the potatoes would have been dug, so in theory we should have had more time to enjoy our games. However, bad weather could put a damper on these, especially the outdoor ones, which were the ones that mattered to us. 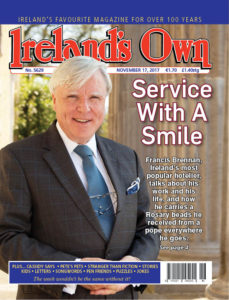 The cold didn’t bother us, but heavy rain or strong winds could interrupt our plans. Fortunately such things didn’t usually happen in November. Frost and fog were the features that I remember most about the month and we regarded them as bonuses, rather than handicaps.

As children, we found it difficult to understand why seniors complained so much of the cold but of course as the years advance, we can appreciate their situation better. Like our ancestors, we wear warm winter woollies and spend much more time indoors than we did in childhood.

Speaking of warm wear, reminds of a person that went into a shop recently and asked the assistant if they had any ‘terminal underwear’ in stock. One is tempted to ask if she had made ‘a grave error’ in her use of language?

TERRIFYING TALES
The long evenings meant big fires and a wide selection of stories, some of which we had heard so often that we almost knew them by heart. With the advent of Samhain, thoughts became somewhat macabre and many of the tales that we heard, related to haunted houses, poltergeists and the banshee.

Even more frightening were stories about the Cóiste Bodhar and headless horsemen.
Superstitious people seemed to have an inordinate dread of the fairies or ‘good people’, as some called them. Dire warnings were delivered about the dangers of demolishing lone blackthorn trees.

Apparently misfortune might also follow anyone foolhardy enough to build an extension at the western end of a house. Even though we were familiar with many of the sagas, they still had the power to disturb us and we did our best to pretend that we were unaffected by them.

Normally we wouldn’t be out alone late at night but even short distances could be intimidating if we had to do them on our own. Two of the scariest places that we had to pass were Creeraun Gate and the spring well on the Gurteen road, known as Tobar Geal.

If we were to credit the storytellers, all kinds of spectral occurrences took place close to them. Apparently a mysterious lady could be seen combing her hair at midnight at Creeraun Gate and this boded no good to those that witnessed it.

Even more disturbing was the description of the large dog that was liable to appear and pursue travellers as they passed An Tobar Geal.

In spite of the aura of dread that accompanied the recitals, we were never informed of the consequences suffered by those that were unfortunate enough to have had first-hand experience of such fearful encounters.

November appeared to be the favourite month for these strange apparitions. I don’t think that our parents paid too much attention to such tales but it’s natural to assume that the ghostly accounts were partly responsible for the occasional nightmares we experienced as children.