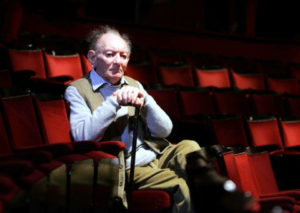 On a sunny afternoon last October, Ireland’s great playwright and author eighty-six year old Brian Friel was laid to rest in the Catholic cemetery of Glenties in west Donegal.  As the funeral made its way across the County from the writer’s home at Greencastle on Lough Foyle’s shore, people turned out along its route to show their respect, pride, and affection for the modest genius who had lived amongst them for over forty-five years, writes Eileen Casey.

Since the passing of Ireland’s greatest playwright, on 2nd October last, tributes for Brian Friel have come from the world of stage, screen and literature. Meryl Streep (who played Kate in the 1998 film version of Dancing At Lughnasa) said “We have lost a tender dramatist, an insightful human being and a lovely man.”

Liam Neeson hailed Friel as the Irish Chekhov, alluding perhaps to the Russian master’s view that the duty of the artist was to raise issues in the work rather than supply solutions.
Friel is remembered primarily as a man who served no master, retaining tight control over his texts and the production of his plays. A staging of Philadelphia Here I Come was pulled from a theatre in Florida recently because of the author’s objections to edits and the addition of Irish music and dancing.

Edna 0’Brien, reviewing Friel’s short story collection A Saucer of Larks (1962) also claimed that the world Friel created was “as real as Chekhov or Camus” and that the stories are everything short stories should be in terms of being funny, deft, skillfully written and often, breathlessly sad. She rates  Among the Ruins and Foundry House, (from A Saucer of Larks) as some of the best short stories ever written.

Most of these short stories first appeared in The New Yorker magazine, which continues to be a highly prestigious outlet for writers.

Continue reading in this week’s Ireland’s Own (issue 5524)