In the Don McClean song, ‘American Pie’, the day he refers to as ‘the day the music died’ is 3rd February 1959, the day when Buddy Holly and three others lost their lives in a tragic plane crash. In Ireland, 31st July 1975, the day when three members of the Miami Showband were murdered by UVF volunteers often claims the unwelcome title. For many music fans around the world, St. Stephen’s Day 2007, ten years ago, when the news broke that Joe Dolan had died, became for them, the day the music died, writes Francis Kaye.

Joe Dolan was arguably the biggest Irish-born international star and without doubt the most successful singer to come from the showbands’ era of the 1960s. 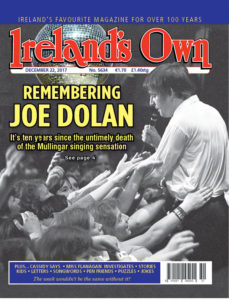 In a career spanning almost half a decade, he had 15 Irish Top 10 hits including five No. 1s and four No. 2s, three Top 20 hits in Great Britain including a No. 3 in 1969 and a number of Top 10 hits in Germany, Belgium and the Netherlands. He released 32 albums and more than 50 singles. Joe and his band toured Ireland, Great Britain, the USA, South Africa, Russia and other European countries.

Joe Dolan was born in Mullingar, County Westmeath, the second youngest boy in a family of seven. Joe’s siblings were Dympna, Patrick, Ben, Imelda, Vincent and the late James. The family lived in Grange South on the Ballymahon Road.

His father Patrick died when he was eight years old and his mother Ellen died when he was fifteen. Joe was left at home with brother Ben, as the rest of the family had either emigrated or settled down. After finishing school in 1958, he joined the staff of the Westmeath Examiner where he served his apprenticeship as a compositor at their offices in Dominick Street.

The Dolan household was always noted for music. Joe played guitar and his older brother Ben played the saxophone so they decided to put a band together in 1960. The Drifters played locally for a while but when the bookings started to come in from venues outside Westmeath, the brothers made the decision to go on the road professionally.

The Drifters was a naive name for the band though as Cliff Richard’s band around the same time was forced to change its name to The Shadows because of a clash with an American vocal group, also called The Drifters. However, it didn’t affect the Irish Drifters!

It was a good time for dance bands as ballrooms and marquees were sprouting throughout Ireland, some in remote areas. Thousands of young people would drive, cycle, walk or ‘thumb a lift’ to the nearest dance.

The band’s big break came when Quinnsworth Supermarkets booked The Drifters to play at heats of their national beauty contest. These engagements gave them much-needed national exposure.

In 1964, Joe and the band went into a recording studio with a Burt Bacharach/Bob Hilliard song which they had heard on the B-side of a Del Shannon single. The song was ‘The Answer To Everything’. With Joe’s husky voice and Des Doherty’s distinctive electric pianet accompaniment, listeners’ liked what they heard and the single reached No. 4 in the Irish charts resulting in lots of airplay.

The next two singles ‘I Love You More And More Every Day’ and a Willie Nelson song, ‘My Own Peculiar Way’ went to No. 3 and No. 2 respectively and it seemed that Joe’s first chart-topper was imminent. However, ‘Aching Breaking Heart’ also peaked at No.2 while a Drifters E.P. (Two of a Kind) went to No. 10.