By Phil Murphy My monthly column is usually devoted to the stars and activities on the Irish music scene, specially the resurgent country and dancing sector, but I make no apologies this month for making an exception to pay tribute to the great Merle Haggard, singer, songwriter, guitarist, fiddler, and instrumentalist, who died on his 79th birthday, April 6th, on his ranch in his native California. 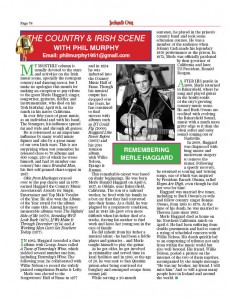 In over fifty years of great music, as an individual and with his band, The Strangers, his influence spread far and wide and through all genres. He is referenced as an important influence by many world music figures and also by a great many of our own Irish stars. This is not surprising when you remember he released close to 70 albums and 600 songs, 250 of which he wrote himself, and had 38 number one country hits since Branded Man, his first self-penned chart-topper in 1967.

Okie from Muskogee crossed over to the pop charts and in 1970 earned Haggard the Country Music Association’s Awards for Single, Entertainer and Top Male Vocalist of the Year. He also won the Album of the Year award for the album of the same title. Among his most memorable albums were The Fightin’ Side of Me (1970), Someday We’ll Look Back (1971), If We Make It Through December (1974) and A Working Man Can’t Get Nowhere Today (1977). Continue reading in this year’s Winning Writers Annual