Francis Beirne writes about Brendan Bowyer of the Royal Showband, who died recently

“The end of an era” is a clichéd comment that is often bandied about unnecessarily but truly, the death on 28th May, 2020 of Brendan Bowyer, is the end of an era.

The era in question being the showbands and ballroom dancing era spearheaded by the big, genial Waterford singer who fronted Waterford’s Royal Showband, packing crowds into dance-halls, marquees and ballrooms throughout this island and Great Britain for almost five decades. 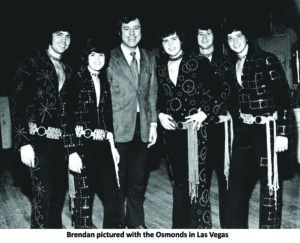 Brendan Bowyer was a genuinely nice man, whom I met on a number of occasions. The first was in 1965 when I was 14. I was standing at Moneenageesha Cross, just outside Galway city, thumbing a lift home from the Galway Races. Not doing very well and getting impatient and a little bored, when a black Mercedes saloon pulled up. “Hop in son,” the smiling driver said. Imagine my shock and surprise when I realised that Ireland’s top star of the day was actually driving me home!

Many years later, when my neighbour Marjorie Delaney had joined Brendan’s band, the Big 8, I was out in my garden when I spotted two people walking towards me down the road. As they came nearer I recognised Marjorie and the tall man beside her looked familiar. It was Brendan of course and they stopped for a chat.
My then elderly mother had always been a huge fan of Brendan’s, so I took a chance and invited them in to meet her, Marjorie of course knowing her for years. Imagine the joy that surprise visit brought!

That was the kind of man Brendan Bowyer was – unassuming, modest, caring and willing to bring a little joy into the life of a fan whom he had not met before.

Brendan’s early years are documented in ‘The Royal Showband Story’ by J. B. Meehan. His father, Stanley, was an accomplished musician and was appointed Professor of Music at the De La Salle College in Waterford where Brendan was a pupil. For a time, he was organist at the Redemptorist Church in Limerick.