Tears were shed on the evening of 30 June 1962 when the final curtain came down on the expansive stage of Dublin’s famous Theatre Royal. It was the end of an era for generations of fans who enjoyed evenings at the Hawkins Street venue, where one could watch a film, have a meal and enjoy some of the biggest names in showbusiness, writes Thomas Myler.

The big heavy curtain came down on Dublin’s Theatre Royal stage for the last time on the night of June 30, 1962, leaving the way clear for the demolition workers to move in a few days later and leave the famous old building in Hawkins Street alongside the River Liffey a heap of rubble. The 12-storey Department of Health now stands on the site. 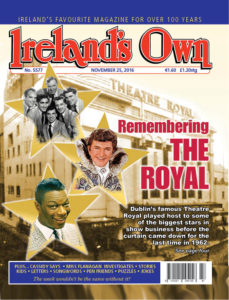 Known simply as ‘the Royal’ to generations of not only Dubliners but people all over the country, it played an important role in the cultural and social life of the capital for 300 years. There had been no less than three previous Royals, but this last one was the most successful. It opened in 1935 and now, just over a quarter of a century later, sadly it was no more.

With a capacity of 3,850 and under the guidance of impresario Louis Elliman, known affectionately as ‘Mr Louis,’ it became the premier entertainment venue in the land. It was not only the biggest theatre in Ireland but in Europe, with the lone exception of one in Germany.

Ireland had never seen anything quite like it, nothing on its scale. There were two performances a day, a stage show under the musical direction of Jimmy Campbell and his 25-piece orchestra, the latest new movie in town, and you could have a meal in the restaurant. Visits to the Royal were so popular that many people were said to have left ‘lifetime’ tickets to their children in their wills.

On that final night, many a tear was shed not only by the capacity attendance but by the many artistes on the last bill. It was the Palace of Dreams, giving the public the opportunity of seeing all the great stars in concert. For a few hours, one could forget their troubles and be transported into a magical world of song and dance, music and laughter.

In this writer’s memories of the 1950s, visits to the Royal were always special. The many cinemas which dotted the city and suburbs were in many ways the great escape for Dubliners, as were the theatres including the Queens, the Capitol, the Olympia and of course the ‘serious’ playhouses such as the Abbey and the Gate. But the Theatre Royal was the best, the place to visit.

And if you wanted a touch of the classics, you had the likes of Margot Fonteyn, Yehudi Menuhin, Arthur Rubenstein, Sir Thomas Beecham, Jussi Bjorling and Lauritz Melchoir. The visiting stars either stayed in hotels or lodgings in and around Parnell Square, and the landlords and landladies were only too happy to welcome such famous stars on their doorsteps and get their autographs, often on photos.

There were the big bands, too, including Joe Loss, Geraldo, Stan Kenton, Billy Cotton, Harry Roy, Ambrose, Mantovani, Henry Hall, Jack Jackson, Johnny Dankworth, Ray Noble, Jack Hilton and the group who ushered in the new rock ’n ’roll era, the sensational Bill Haley and His Comets with their ground-breaking hits including Rock Around The Clock, Shake Rattle and Roll and See You Later, Alligator.

What other theatre in this part of the world, outside of London perhaps, could boast such a ‘cast list.’ Indeed, it was said in theatrical circles that if international artistes or bands did not play the Royal, then they really had not made it.

Continue reading in this week’s Ireland’s Own (Issue 5577)