Monthly sports columnist, Eddie Ryan, takes a look at the
Republic of Ireland record breakers
(from our June Summer Special)

Since making their international football debut as the Irish Free State in 1924, Ireland have played seventy six different nations in total. They have also played against three nations which no longer exist. (Czechoslovakia, Soviet Union and Yugoslavia).
Ed Brookes, of Bohemians, scored the first ever international hat-trick against the USA, also in 1924. 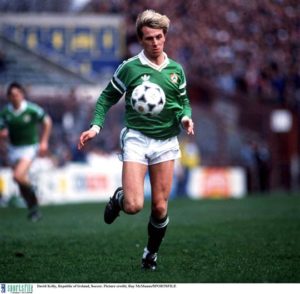 The quickest goal ever scored by an Irish international, was scored by Paddy Bradshaw. He struck after just 20 seconds in a 4-0 win over Switzerland, at Dalymount Park in September 1938. Bradshaw was among a number of players who have scored on their debut for Ireland. David Kelly (left), however, is an exclusive band all on his own.
On the 10th November, 1987, Ireland played Israel in a friendly at Dalymount Park. Kelly, then of Walsall, struck twice in the first half. He then added another with a second-half penalty, to become the first player to complete a hat-trick on his debut. Kelly’s most famous goal was one that never counted, it came in a friendly at Lansdowne Road, in 1995, against England. Kelly hit the net just before the half-hour mark. The match was later abandoned after English fans began rioting.

The Republic of Ireland soccer team has never won a major international soccer trophy. Their sole successes have come in friendly tournaments; in Iceland (1986), and the Celtic Nations Cup at the Aviva Stadium in 2011. 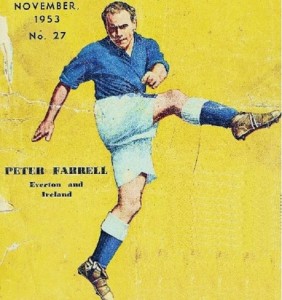 One of Ireland’s most famous victories against England happened on 21st September, 1949, at Everton’s home ground, Goodison Park. Peter Farrell scored the second, and decisive goal, in rather unique circumstances. The Everton club man scored on his own home ground, in an away match for his country. Ireland duly became the first team from outside the ‘Home Nation’ to defeat the mighty English.

Ireland’s biggest ever win came against Malta (8-0), in an 1983 Euro 84 qualifier at Dalymount Park. Mark Lawrenson scored twice, as did Kevin Sheedy, while Liam Brady, Gerry Daly, Frank Stapleton and Kevin O’Callaghan were also on target.

The biggest ever defeat came against Brazil, who hit ‘The Boys in Green’ for seven, in a 7-0 drubbing in 1982. Ireland’s longest run without a win is five years. After defeating Czechoslovakia on the 22nd of November 1967, they did not win in fourteen competitive attempts. Finally on the 15th November, 1972, a much needed victory was secured against France (2-1) at Dalymount. Their longest run without a loss stands at sixteen, spanning three years. A victory over Turkey on 17th October, 1990, kick-started the run which ended in October 1993, when Spain defeated Ireland 3-1.

On 30 May, 1971, Jimmy Holmes became the Republic of Ireland’s youngest ever player.
He was just 17 years and 200 days old when lining out against Austria. Wexfordman, Bill Lacey, was the oldest player, at the age of 37, to make his debut for the FAI XI. He was selected to play against Italy B. Lacey then became the oldest player ever on May 11, 1930. At the tender age of 41, he donned the green jersey against Belgium.
Robbie Keane holds a host of Republic of Ireland soccer records. He has scored the most goals (67) and holds the most caps (144). He has also captained his country on a record fifty occasions.

Mick Meagan was the the first Irish international soccer manager. John Giles took over Ireland while still playing for Leeds United, and with no previous managerial experience.
Wicklow-born Alan Kelly Senior, set a record for the shortest time in charge. Kelly who had played in goal for Ireland, was also caretaker boss at former club, Preston. His stint lasted just one game as Ireland beat Switzerland 2-0, in a friendly match at Lansdowne Road. Kelly decided he could not do both jobs, and left with a one hundred per cent record! Don Givens (pictured) occupies a unique place in Irish soccer history. The one-time record goal scorer for his country, also managed his country three times (twice as a caretaker manager), and he was also Under-21 manager. Kevin Sheedy of Everton netted Ireland’s first ever World Cup Finals goal, against England in 1990.

Ray Houghton, Ronnie Whelan and Sean St. Ledger, have been Ireland’s only goal scorers in the Euro Final tournaments in 1988, and 2012. Here’s hoping for some new goal scoring heroes in France 2016.