Role of the Irish in WWII Series – Nurse & Spy Leader

In her book “Angels of the Underground: The American Women who Resisted the Japanese in the Philippines in World War II,” Professor Theresa Kaminski details the stories of four women who risked their lives in clandestine efforts to help the Allies. One of these heroines is a five foot tall red-headed Irish woman named Peggy Utinsky.

This remarkable Irish-American nurse was not even in the military yet she was to serve ‘above and beyond’ throughout the war. Her humanitarian efforts began as a personal search to find her husband, and ended in a successful campaign to provide food and supplies to hundreds of US prisoners of war. Her code name was “Miss U”, which also became the title of her 1948 memoir detailing her World War II exploits. 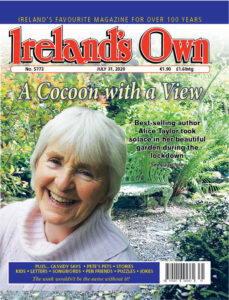 She was born Aug. 26, 1900, in St. Louis, Missouri to James and Lydia (Horner) Doolin, and spent her childhood on a wheat farm in Canada. In 1919 she married John Rowley, however he died the following year leaving behind Margaret and their baby boy, Charles Grant Rowley.

In 1924 Margaret graduated from nursing school and became an RN. Two years later she travelled with her son to The Philippians, where she worked as a nurse. As the islands became her home, she met and fell in love with a young Virginian by the name of John (Jack) Utinsky, an engineer who worked for the U.S. Government. They married in 1936, and settled into life in Manila.

As the likelihood of a Japanese attack grew in the Far East, the U.S. military ordered all American wives back to the United States. Unwilling to part from her husband, and with her son back in the United States, Margaret refused to obey the order. Saying afterwards: “I was born Peggy Doolin, and having Irish blood, I don’t like being told what to do.”

She took an apartment in Manilla while her husband headed off to Bataan to work. Then, in December 1941, the Japanese invaded the Philippines.