Ronan Collins – Reeling in the Years

Popular Radio One presenter and accomplished musician Ronan Collins is back on the road reliving happy memories for Irish music fans with his hit show ‘Reeling in the Showband Years’ . He tells Kay Doyle about his life as a long-serving radio and television presenter as well as his drumming career, and how after his recent health scare he is looking forward to whatever opportunities 2018 brings his way.

Ronan Collins has begun 2018 feeling fit and well after a recent health scare that he feels may have had a less happy ending had it not been for the excellent care he received at the hands of our medical professionals. 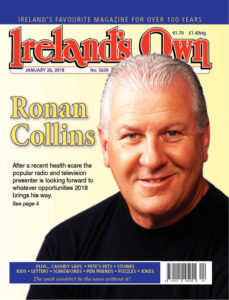 “I feel very well now, and back to my old self,” says one of RTÉ’s longest serving day broadcasters. “It was in the autumn of last year when I started to feel unwell. I had lost the feelings in my legs, there was no pain, but I couldn’t stand properly. My brother took me to my GP and from there I was rushed into A&E. I went into Connolly Hospital as an emergency case, through the public system, and spent about thirty hours there being examined.

“It wasn’t immediately obvious what was wrong with me so I was taken by ambulance to Beaumont Hospital. They did an MRI and they described it as a cyst pressing against my spinal cord, and it needed to be removed immediately. I was operated on early on Sunday morning and by Sunday afternoon I was sitting up in bed feeling much better.

“The care I received was excellent, and the priority from the outset was my health. If they had waited for another twelve hours, I could have ended up in a wheelchair for the rest of my life. I have a lot to be thankful to them for.